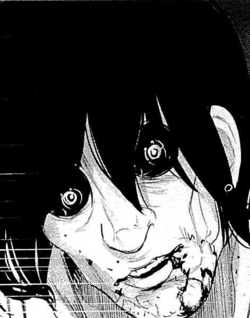 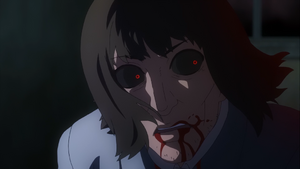 Ryan Ingrim (anime)
Chris Guerrero (film)
Kazuo Yoshida (吉田 カズオ, Yoshida Kazuo) was a ghoul who Ken Kaneki met in a dark alley and moments later was killed by Nishiki Nishio, since he was feeding on his turf. He also appeared in an omake at the end of several volumes and worked as chief instructor in the Fitness Club ZEN.

Kazuo was a middle aged man with chin-length brown hair. While he had an attractive body, others told him the same could not be said for his face.

Kazuo was gullible and not very experienced with women nor perceptive of other people's possible bad sides. He also was self-conscious about his age. To calm himself down he would exercise and take up a mantra. Before his death, his last mantra to repeat to himself was "I'll kill 'em, seriously one day I'll kill 'em" with no serious intention to actually kill the people who did him wrong. He instead continued to curse himself and his own shortcomings. His personality seems to differ between the manga and the anime: In the manga, he was very possessive of his victims, cursing and threatening to kill Kaneki if he did not leave him to enjoy his meal. In the anime, he was polite, asking if Kaneki was feeling alright, and (as he claims he did not eat for a while) was able to sympathize with Kaneki, going far enough to offer a small portion of his victim to the boy.

Kazuo was enjoying his meal in a dark alley as Ken Kaneki, who was following the scent of human flesh, ran into him. As he was perplexed by Kaneki's sudden breakdown, he quickly claimed ownership of the corpse and threatened to kill Kaneki unless he left this instant. Suddenly, Nishiki Nishio showed up and killed him with a heavy kick to the head.