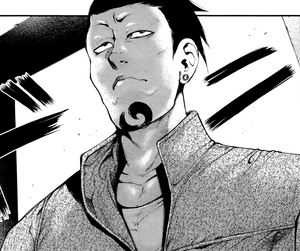 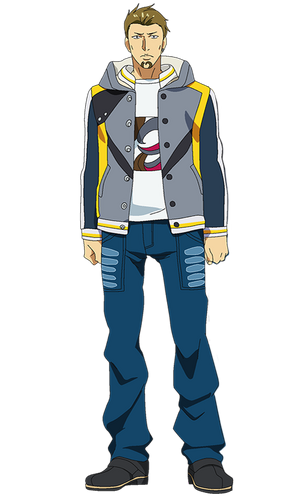 "I'm fine. So stop blaming yourself. Before you can save anyone else, you have to be saved."— Kazuichi Banjou, Tokyo Ghoul Chapter 107

Kazuichi Banjou (万丈 数壱, Banjō Kazuichi) is the former leader of the 11th ward, and current leader of the 6th ward. He is a past associate of Rize Kamishiro and fell in love with her, leading him to defy Aogiri Tree to protect her. After being rescued from Aogiri by Ken Kaneki, he swore loyalty to him and helped as a member of Kaneki's group.

He is almost always accompanied by his followers, Ichimi, Jiro, and Sante.

A towering, stout man with short flushed hair, Banjou carries a strong heart. He had a distinctive reverse "の" for a beard, but after :re Chapter 65, he is shown to have a cross-shaped design instead. 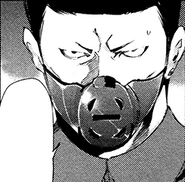 Banjou is a pacifistic ghoul and is very lacking in combat. He admires those who are strong and unbound by strict rules. Unlike most ghouls from the 11th ward, Banjou seems to have a fair bit of compassion towards others. As such, he respects people who show him kindness, such as Kaneki. Banjou is very sensitive to a person's state of mind. He sensed Kaneki's growing internal conflict and correctly predicted that he would snap as his mind grew increasingly unstable.

He has become more charismatic, intelligent and dexterous after the timeskip. He has successfully united the ghouls of the 6th ward as their leader, he is more educated being able to read and evaluate complex novels to a degree. Surprisingly he can now use his kagune for healing purposes.

When Rize Kamishiro lived in the 11th ward, he spoke in favor of her in the ghouls' ward meetings. He looked up to her and wanted her to become the leader of the ghouls in the 11th ward. His admiration was not reciprocated: she just called him annoying and threatened to kill him if he dared follow her. When the ghouls under Hagi ambushed Rize as she was about to leave the ward, Banjou came to her aid but found she had already killed her attackers. Before her departure, Rize referred to him as the "leader."[3]

Because he felt Rize had given him the duty, Banjou attempted to unify the ghouls of the 11th ward and become their leader.[4]

Aogiri Tree's ghouls came to the 11th ward and easily conscripted him. Ordered to search for Rize, he travelled to 20th ward's Anteiku, since she was headed there when leaving the 11th ward.

While questioning Rize's whereabouts at Anteiku, he noticed Ken Kaneki's similar scent. Assuming him to be her boyfriend, he attacked, but was accidentally knocked out cold in Kaneki's frantic attempt to pacify him.[4] When he recovered, he asked Kaneki to tell Rize to run away, fearing what Aogiri would do to her.

At this moment, Ayato Kirishima kicked through the shop window, breaking Banjou's arm. Together with Yamori and Nico, he captured Kaneki, "the person who smelled like Rize," in her stead. Overpowered, Banjou and his followers were forced to accompany the three back to headquarters.[5]

Banjou attended Aogiri's meeting where Kaneki was brought before Tatara. After the meeting, he approached Kaneki and proposed that they should escape Aogiri together.[6]

Kaneki agreed and joined Banjou's Anti-Aogiri group, who waited until Ayato Kirishima, Noro and Yamori were all absent from the 11th Ward Base and attempt to flee.[7] The escape however was discovered by the Bin brothers, one of whom Banjou unsuccessfully tried to fight. Yamori returned and foiled the escape - taking Banjou and his followers as prisoners while torturing Kaneki.[8]

The remaining Anti-Aogiri members are freed by Kaneki during the 11th Ward Battle and along with Ichimi, Jiro and Sante Banjou joined Kaneki's group.[9]

Banjou worked closely with Kaneki, training with him[10] and often accompanying him during his investigation of Kanou[11] and trips to the 6th ward.[12] During the group's attack on the Ghoul Restaurant Banjou and the trio sneaked in disguised as janitors.[13] He accompanied Kaneki to Kanou General Hospital and later in the struggle over Taguchi, Banjou fought Gagi and Guge.[14]

When Kaneki announced the disbanding of the group, Banjou stated that he would follow Kaneki in going to Anteiku.[18][19]

He was last seen after the battle with Hinami Fueguchi and the trio as the former contemplated Sen Takatsuki's business card.[20]

During their undercover investigation, the Quinx Squad learned that a new leader had taken over control of the 6th ward.[21]

Six months later, Ayato approached Banjou, the current leader of the ghouls in the 6th Ward, as Banjou was reading Eto's final novel and discussing it with his subordinates. Ayato requested Banjou's assistance in attacking Cochlea to rescue Hinami before she would be disposed of.[22] Banjou agreed to Ayato's request and gathered a large group of members, but he stressed that he only did this for Hinami's sake and that he owed Ayato nothing.[23]

During the day of the raid, he and Ayato gathered with a number of ghouls and infiltrated Cochlea only to find the alarms ringing.[24] Soon they realized that some perpetrator unknown to them was freeing ghouls inside Cochlea. Using the chaos caused by the escaped ghouls, they entered the compound. Banjou and his men fought with CCG guards while Ayato went deeper into Cochlea in search of Hinami.[25] After some time, however, Shinme Haisaki ordered the release CRc Gas throughout the compound, prompting Banjou and his remaining men to go further down inside Cochlea.[26] While running through Cochlea, Banjou ordered his crew to hurry up as they will be left behind by Ayato's group.[27] Banjou reunited with Hinami, Ayato and Touka, and the group continues to move towards the compactor. As they approached and proceed to go through the compactor, Furuta activated the machine, killing many ghouls in the process.[28] During the fight with Kiyoko and Mougan who they encounter while the survivors advance towards the exit, Banjou prevented Hinami from intervening to save severely injured Ayato.[29] As Touka got overpowered by the duo, she pleaded Banjou to commence healing Ayato, as Banjou activated his kagune.[30]

A month following the raid, Nishiki Nishio mentioned that he was keeping Roma Hoito with one of Banjou's subordinates so they could all attend the meeting at Tsukiyama's place.[31] He attempted healing an injured Akira while being accompanied by Hinami and Seidou at an unknown building.[32] As Akira's condition worsened, Banjou was attacked by a terrified Seidou, as Nico approached the group.[33] Nico offered to help the group, saying that he could lead them to two doctors who are able to assist in Akira's recovery. As Banjou and the rest of the group furiously refused Kanou's help, Nico gave them another option, a doctor from an organization called Great Wheel.[34]

Banjou, with his prior experience commanding hundreds of ghouls, works on managing the activities of the United Front with Tsukiyama.

Banjou's three gas-masked followers are almost always seen accompanying their leader wherever he goes. The four's history dates back to when they all were a part of the 11th ward. They all share a very close bond with Banjou and are surprisingly loyal towards him. The three willingly follow him through any situation, even if it means risking their lives to help. They are also all well aware of his shortcomings and often display an overwhelming concern for when he's in trouble. Despite their vast respect for Banjou, the three are not above jokingly poking fun at him from time to time too.

Banjou's initial reaction towards Kaneki was a hostile one as Kaneki's similar scent to Rize led Banjou to believe that the half-ghoul was in a relationship with her. However, when the situation was properly explained, it was then Banjou began to revise his first impressions. After realizing Rize's fate, Banjou develops newly found respect towards Kaneki. He thereupon expresses appreciation for Kaneki's concern for his feelings despite the deceit. Afterwards, having gone through many trials together escaping Aogiri's captivity, Banjou sees Kaneki as a dear friend. As such, he offered to help Kaneki on his endeavours by being his "shield." While he admits his combat skills are too poor to be of any assistance, he always gives everything to help Kaneki in anyway he can. He respects Kaneki to the extent that he easily forgave him when the latter critically injures him in a half-crazed state, instead assuring Kaneki that he would always protect him.

Banjou is known for harboring a distinct affection towards Rize. He admires the way she lives her life through her own accord, however reckless it may be.

Ever since Rize's arrival in the 11th ward, Banjou grew a palpable fascination for her presence. During the scheduled meetings there, he would often fend off the criticisms she would receive from the other members attending. Outside of that, Banjou would actively seek out Rize and try to strike up conversations with her, much to her annoyance. Despite later being berated by Rize and eventually parting ways with her, Banjou still continued his devotion on the off-chance they would one day meet again.

Hinami looks up to Banjou like a big brother. He often accompanies her when Kaneki is not around to do so.

In :re, Banjou still greatly cares for Hinami as he agrees to help Ayato save her from Cochlea and affectionately refers to her as "Hina-chan."

Banjou served under Ayato during his time in Aogiri Tree, where the latter beat and berated him repeatedly. He despises the fact that the younger ghoul bosses him around and that he cannot do anything about it. Years later their relationship remains strained, however they're able to cooperate in times of need.

Banjou is mistrusting of Shuu and his motives but tolerates the younger ghoul because of Kaneki's wishes.

By ghoul standards, Banjou has very little strength. His followers acknowledge this, and remind him of this when he gets involved in dangerous situations. He is very lacking at hand-to-hand combat and is unable to use his kagune. What's more, he is naturally not suited for fighting because of his peace-loving personality. Banjou however possesses extraordinary regenerative powers even for ghouls shown when he healed the wounds caused by Eto and a berserk Kaneki almost instantaneously. Whether this was due to his kagune or other factors is unknown. Banjou's kagune appears to be an ukaku, though it only appears as a stump on his back which is rather useless in combat. 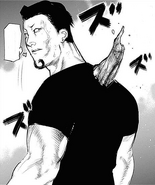 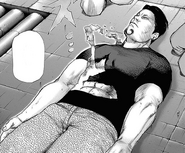 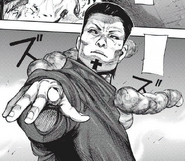