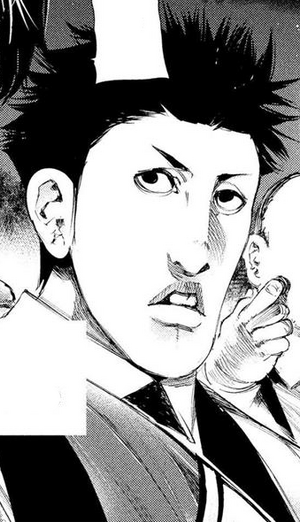 Katsuya Mabuchi (馬淵 活也, Mabuchi Katsuya) is a Rank 1 Ghoul Investigator and is a part of Division II. He is the subordinate of Itsuki Marude and is normally seen standing beside Marude.

He has brown disheveled hair and distinctively large buck teeth. He is most usually seen wearing a white shirt and black tie.

He appears to be professional most of the time but can also be flippant at times, best demonstrated by his testament which reads "Yeah, I died. I don't need a funeral. Bye"[2]

Originally a talented Engineering student at Teihou University, he specialized in Information Engineering and was a skilled programmer. However, he began to lose interest in his studies and became absorbed in playing video games — eventually establishing himself as a famous player in competitions. An expert in first-person shooters and strategy-based games, he eventually led his team to victory at a national tournament.[3]

During this time, he was scouted by Special Class Marude and recruited to work for Division II.

Mabuchi participated in the operation against Aogiri Tree in the 11th ward as a member of the 11th Ward Special Countermeasures Unit.[4][5]

Mabuchi was tasked with tracing the anonymous tip which gave the location of the 11th Ward Base and successfully figured out it came from Hideyoshi Nagachika.[6]

He served with Hide in Marude's command staff and was seen analyzing the strengths and weaknesses of the various groups and sending out orders.[1]

Mabuchi became the head of the intelligence department at the TSC. He assisted chief Marude in his duties, even after Marude retired from the TSC. He continued to be involved in ensuring peace in Tokyo.

Mabuchi possesses a surprising knack for strategy and coordination. When applying his talents, he goes into a trance-like state, rapidly typing away while relaying objectives to units on the field.