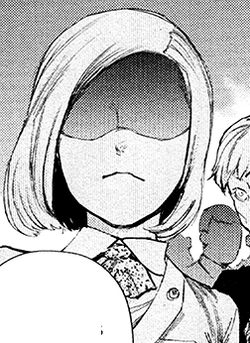 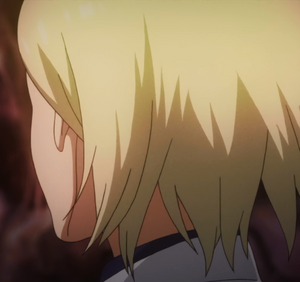 Episode 21
Kasuka Mado (真戸 微, Mado Kasuka) was an Associate Special Class Investigator [3], the wife of Kureo Mado and the mother of Akira Mado who was killed by the One-Eyed Owl during an investigation in the 24th Ward.

Although Kasuka's face is not shown completely, it is strongly implied that she looks very similar to Akira Mado, except that Kasuka's hair is styled flat.

Like all the members of CCG, Kasuka wears a formal attire.

Despite little exposure of kasuka's character, she was shown to be a brave and strong-willed woman as she had a face-off against the One-Eyed Owl alone, but it is also known that she cared for Kureo Mado and Akira Mado greatly.

Kureo Mado had chosen to be taken in by her family (who happened to be his professor at the time). Apparently, Kasuka refused his proposal because she didn't want to change her last name.

Like Kureo himself, she was also a CCG investigator and they both went on a mission in the 24th Ward under the command of Itsuki Marude ten years ago. Unfortunately, they encountered the One-Eyed Owl during a deep investigation at the 124th floor. Knowing the slim chance for them to defeat Owl after the first few casualties, Itsuki ordered her, who was the best among their team, to hold off the Owl alone so others could retreat safely. She was killed and devoured on the mission while the scattered remains of her body were later found by her husband.

Her death had a major impact on both Kureo and Akira Mado.[4]

Akira Mado states that Kasuka was an Investigator of considerable strength and skill, achieving a high rank at a young age. While serving alongside Kureo Mado and Itsuki Marude, she was considered the most capable member of their squad.[4]

Kureo is Kasuka's husband who were known to have had a very loving relationship. Her brutal death has led her husband to despise the existence of all ghouls and seek vengeance towards the One-Eyed Owl.

In the early years however, Kasuka turned down Kureo's marriage proposal at first, due to not wanting to change her last name.[5]

Akira and Kasuka shared a loving mother and daughter relationship that her death has affected Akira greatly.

It is known that Kasuka and Kiyoko were classmates together in the academy where both of them were known to be strong and exceptional women in CCG.