Kamii University is organized into departments. Below is a list of known departments and corresponding courses of study:

Building at the campus. 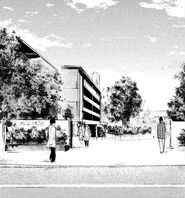 Entrance to the university campus.
Add a photo to this gallery

Retrieved from "https://tokyoghoul.fandom.com/wiki/Kamii_University?oldid=464696"
Community content is available under CC-BY-SA unless otherwise noted.