Edit
watch 01:17
'Tokyo Ghoul' Profile: Kaiko
Do you like this video?
Play Sound 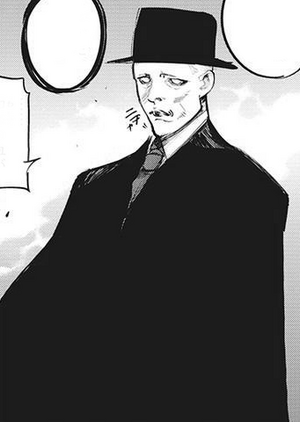 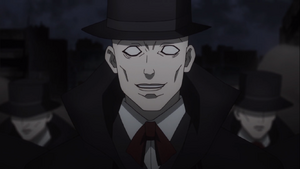 "These ghoul bastards are putting us through the paces. For the sake of peace they must die."— Kaiko, Tokyo Ghoul:re Chapter 112

Kaiko (芥子, Kaiko) was originally a half-human and a highranking member of the mysterious organization V. He was one of the main conspirators for the birth of Dragon, a plan responsible for the ghoulification of Tokyo. He became a ghoul after receiving the toxin from the dragon.

Kaiko was a mysterious figure. He was bald and his eyes seemingly lacked irises. His lips were black in color and he wore a black hat at all times, like the other members of V. He wore a formal suit underneath a black duster coat and concealed his hands with dark gloves.

Not much was known about Kaiko except that he was loyal to the organization V, and was targeting Eto and Aogiri Tree due to disrupting the stability of ghouls and humans.[2] Kaiko believed in poise and decorum as he berated Furuta for his improper speech while deferring to Arima's verbal report.[3]

Not much was known about Kaiko's past other than the fact that he was raised in the Sunlit Garden as a half-human and trained Kishou Arima. He used to know Yoshimura before he left their organization.

He appeared to Yoshimura and offered him one last chance to rejoin them by giving up Eto to them and swearing loyalty to V. After his offer was refused he told Yoshimura that he should go and die, and that there's nowhere for Yoshimura to run, because he's inside a cage.[2]

Arima and Nimuru Furuta reported in to Kaiko at one of V's establishments about Eto and the likelihood of her being the "King". He ordered Arima to deal with something associated with Rize Kamishiro and Furuta to continue shadowing Kaneki.[3]

Kaiko was present in the murder of CCG chairman Tsuneyoshi Washuu along with Uta, Donato Porpora and Furuta.

Kaiko was present among the group of V members heading for the laboratory. Afterwards, he reappeared in the battleground, witnessing Matsuri Washuu killing V, CCG, and Clowns members. Kaiko stated that the Washuu bloodline was a thorn in V's side before brutally defeating him by 'cutting him into ribbons'.[4]

Kaiko with members of V and a mysterious One-Eyed Owl started fighting the CCG. Kaiko recognized Yusa as a close relative of Arima, taunting him by boasting that he used to train Arima himself, only to get his face split by Yusa. Kaiko easily regenerated from the attack, showing that he accepted the 'toxin' from Dragon, calling it a blessing. Shortly after, with the black hats, he retreated before the Owl launched a great attack to the members of the CCG.

After the Owl stopped moving, he reappeared this time with the corpses of Koma and Irimi as remote quinques, and began to fight on his own against the CCG squads, having the upper hand, but the formerly Anteiku members soon appeared to join the battle. When Eto re-emerged from the body of the Taxidermied Owl and tore off Kaiko's arm, he was surprised by the fact that Eto is still alive. Then, the White Suits entered the location, skewering numerous members of V, with Kaiko disbelieved at the fact that Naki is alive, stating Nimura's report had said otherwise.

During the continuation of the battle, his head was cut to shreds by Take Hirako.

Kaiko had a presumably higher position in V, and issued orders to Arima. He seemed to value him for his strength and eloquence during their meeting. Kaiko was also the apparent mentor of Arima, as he used to train him in his younger years. It seems that from his conversation with Hirako, Yusa, Kuroiwa and Kuramoto that he is aware Arima betrayed V and seems to now hate Arima, even mocking him for not siding with them. It is unknown if he knows Arima was the One-Eyed King.

Kaiko had a presumably higher position in V, and issued orders to Furuta. He reprimanded him for his lack of manners during their meeting. Nonetheless, they were still capable of cooperation, as they exterminated the Washuu family together and collaborated on the creation of Dragon.

Half-Human-Physiology: Being a failed half-ghoul, Kaiko was granted increased physical abilities at the cost of a shortened life span.

Ghoul Physiology: After being turned completely into a ghoul from the toxin from Dragon, Kaiko received abilities he lacked as a Half-Human.

Swordmanship: Kaiko was a very skilled swordsman, able to keep up with Ghoul Investigators like Take Hirako and Yusa Arima, and often overpowering them during their confrontation. Given how easily he single-handedly defeated Special Class Matsuri Washuu after the latter slaughtered Kaiko's subordinate officers, it is obvious that his skills are far beyond those of his subordinates