This article is about the Gas Masks sister. For other uses, see Jiro (disambiguation). 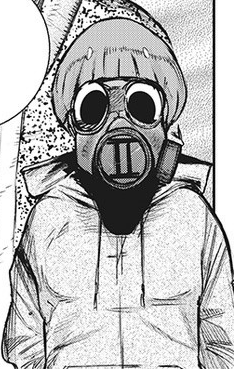 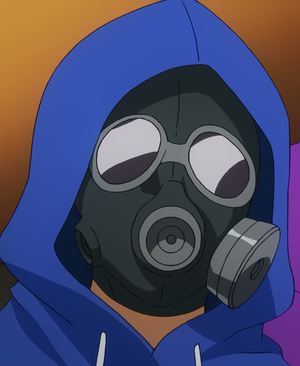 Whitney Rodgers
Jiro (ジロ, Jiro) is one of the followers and the wife of Kazuichi Banjou, the former leader of the 11th ward's ghouls. She commonly accompanies her brothers, Ichimi and Sante. Following Banjou, she joined Kaneki's group of ghouls.

Typically, she wears a gas mask with two filters and a hoodie with the number two stitched on the hood (次, ji, lit. "next, following").

Under her hood, she sports a bob cut and has light auburn hair.

Jiro has a very playful disposition much like her brothers, occasionally joining or instigating their teasing against Banjou. She, along with Ichimi and Sante, has been shown to have a compassionate and honest nature (particularly regarding Banjou), even when in the presence of strangers.

Ichimi, Jiro, and Sante followed Kazuichi Banjou as Banjou visited Anteiku. After Kaneki had unintentionally knocked out Banjou, they told him about Banjou's one-sided admiration and love for Rize Kamishiro and how Banjou tried to lead the ghouls of the 11th ward. They also expressed their disdain about the Aogiri Tree ghouls who suddenly usurped the power in the 11th ward..[2]

As part of Anti-Aogiri she took part in the escape attempt. She, along with Ichimi and Sante, killed an Aogiri guard who set off the alarm, and along with Banjou and Kaneki, they stay behind to fight the Bin brothers to give the rest of the group a chance to escape.

They were taken back into custody when Yamori intercepted the rest of the group but were freed by Anteiku during the 11th Ward Battle.

Ichimi, Jiro, and Sante followed Banjou into Kaneki's group after the battle.

As part of Kaneki's group, Ichimi, Jiro and Sante assisted him in his search for Akihiro Kanou and infiltrated the Ghoul Restaurant disguised as janitors.[3] Later, when fighting over Taguchi with Naki and Shachi, the trio fought Gagi and Guge,[4] a fight they continued in Kanou's Lab before teaming up to fight the ghoul investigators.

When Kaneki wounded Banjou, the trio attempted to protect their old leader but were easily knocked aside.

When Kaneki's group was dissolved, the trio said they would follow Banjou wherever he went.

After the Owl Suppression Operation, with Hinami and Banjou, Jiro looked at Sen Takatsuki's business card.[5]