Edit
watch 01:30
Who is Iwao Kuroiwa?
Do you like this video?
Play Sound 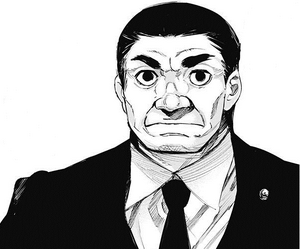 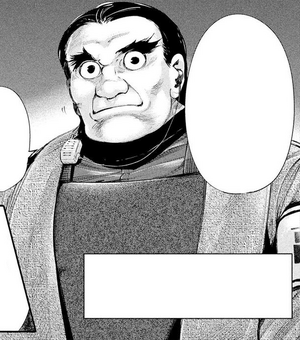 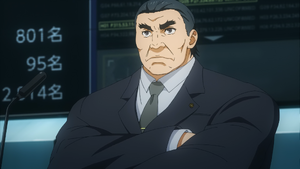 Iwao Kuroiwa (黒磐 巌, Kuroiwa Iwao) was a Special Class Ghoul Investigator and an Investigation Commander in Division I. He served as the Vice Commander of the 11th Ward Special Countermeasures Unit, and Vice Commander of Squad 1 during the Owl Suppression Operation. He was seriously wounded during the battle, losing his left hand. Even so, he has managed to continue serving as an investigator and was greatly admired for his charisma.

His son, Takeomi Kuroiwa, is also a Ghoul Investigator serving in the 1st Ward.

He was a large stocky man with a square face, thick eyebrows, and round eyes. Like most CCG investigators, he wore formal clothing.

In :re, Iwao's appearance remained unchanged, but was missing his left hand from fighting Yoshimura which he replaced with a prosthetic.

When he was 29, Iwao was less bulky and was seen wearing the standard CCG suppression armor.

Kuroiwa was mostly silent and stoic, merely grunting as a response many times. Even after losing his arm to Yoshimura he simply grunted and called it unavoidable. He thought the nutrients one gets from food were more important than training. Therefore, he believed a woman who is good at cooking is the best choice to be a wife.

He appeared to be crying as he comforted his wife at his son's wedding.

Ten years before the Steel Beam Incident, Kuroiwa fought during the second attack in the 2nd ward by One-Eyed Owl's faction as part of a special team. He dealt lethal damage to Owl's kakuhou with his quinque, but he was also seriously injured.[7]

During at least one of the Owl Encounters Iwao served in S3 Squad under Mikito Urie.[8]

He was appointed vice commander of the 11th Ward Special Countermeasures Unit that was meant to deal with the Aogiri threat in the 11th ward.[1]

During the 11th Ward Battle he, along with Shinohara, used his Arata proto to fight Yoshimura and was left wounded from the fight.

After the battle, he recommended Amon for promotion after having seen him fight first hand.[9]

He took part in the Owl Suppression Operation as part of Shinohara's squad. He assisted in bringing down Yoshimura, however, he lost his left arm during the fight[10] and was quickly knocked off the roof by Eto on her arrival.[11]

He was seen in Shinohara's hospital room after the battle and was told by Fujishige Iba that he should be grateful it wasn't his dominant arm he lost.[12]

Kuroiwa appeared during the reception following the Award Ceremony, greeting his son and Kuki Urie. Tooru Mutsuki discussed his amazing ability to continue serving, even after losing a hand.[citation needed]

Kuroiwa was seen defending the 22nd Ward with Takeomi, Misato Gori and Kuramoto Itou.[13] He brought news of his son's marriage to fellow investigator Kiyoko Aura in the hospital, discussing Akira's disappearance and lamenting the fact that Itsuki Marude and Shinohara were no longer with them.[14] He is later seen killing Clowns during their siege.[15]

Kuroiwa attended his son's wedding to Yoriko Kosaka, shedding tears of joy alongside his wife.[16] Later on, Kuroiwa was given the news of his daughter-in-law's expected execution and his son's incarceration for attacking another investigator out of rage by Bureau Chief Kichimura Washuu. Clearly at a loss, he stared out into the vast city landscape.[2]

Kuroiwa met Urie to discuss plans revolving around Yoriko. Urie asked Kuroiwa why he decided to agree with what the younger was planning to do and he simply replied with: "I heard you were a friend." Urie believed that Kuroiwa was mistaken with whose idea the plan had been (Saiko) but he was not talking of the plan, but instead of his son, Takeomi. Kuroiwa stated that his son would often talk of how great Urie was, saying the he was 'truly something'. Iwao went on to quote his son's words about Urie, ending with; "a good friend and my rival."

Urie was taken aback with all the flattery, not truly knowing how Takeomi saw Urie, but before talking more about the matter, Kuroiwa interrupted Urie's thoughts mentioning how he saw his father in him, which made Urie completely quiet.

Urie and Kuroiwa approached Kichimura in his office. After a brief questioning of the matter, Kichimura mocked Urie and Kuroiwa with a smile as kagunes struck the CCG, Shikorae and Roma revealing themselves from under Kichimura's table, who stood on top of it and told them to die.

After being saved by Urie from an attack by Shikorae and Roma, Kuroiwa took a sword off of the wall and prepared for a fight. Urie asked him if the sword was enough to damage the ghouls, Kuroiwa replied, stating that there was a trick to it.

Kuroiwa began by slicing Shikorae across the face horizontally, then again vertically. His false hand got blown off by Shikorae's kagune, also sending the sword across the room, which Roma picked up and attacked the unarmed Kuroiwa with, but he dodged her attacks easily and grabbed her arm, throwing her away from his sight. At some point he encountered Shikorae again, but wasted no time and grabbed his neck with his arms, causing the ghoul to lose the oxygen that he needed, before dropping him to the floor.

Just when things were looking good, Urie got pierced by an attack from behind, which turned out to be Roma, who was a lot stronger than she appeared, turning into a SSS-rated ghoul, and was about to finish off Urie, but Kuroiwa stood in the way with the sword in his hand.

Kuroiwa sliced Shikorae's arm, then kneed him in the stomach. Kuroiwa took a moment to catch a breath and was almost hit by Roma, but dodged it at the last minute. Roma's large fist got thrown his way and he tried to defend with the sword, but got flung across the room and into the wall. There was no time to move out of the way when Shikorae released his kagune into Kuroiwa's left and right arms. He took a moment to register the situation as he was being lifted into the air by Roma and getting his right arm crushed under the weight of Roma's fist.

Urie tried to get up and help, but was swallowed by Roma. Kuroiwa, still in the firm grip of Roma, got his arm ripped off, it is not too long after that when Urie sliced free from inside Roma's large form, and began to take charge, snatching Kuroiwa away from his doom, and gently placed him on the ground before continuing the fight.

After Shikorae and Roma were defeated, Urie ran to Kuroiwa's side and asked him if he was alright, which he did not respond to, but instead apologised to him because of the death of Urie's father, saying that he could not protect him and that it had been his fault that Mikito died. Urie shouted at him, explaining that it had been no one's fault and that he had blamed no one but himself all along.

Kuroiwa somewhat smiled and said that Urie really was like Mikito, before Kichimura unsheathed his sword and plunged it into Kuroiwa's neck, causing him to fall back into Urie's arms.

He held on to what little time he had left for a while, until he heard Marude telling him that he was not alone and that he was there for him, which allowed Kuroiwa to drift off into eternal sleep, seemingly dying at the hands of Kichimura.

Prior to the dragon battle, he was hospitalized, but after his neck injury healed, he served as an assistant to chief Marude. With the birth of Takeomi and Yoriko's son, he became a proud grandfather.[17]

The two were fellow comrades and good friends with each other. Kuroiwa often went on missions with Shinohara, fighting strong ghouls and the Non-Killing Owl twice.

Iwao was close with his son and often showed him silent respect, only patting him on the arm as congratulations for his achievements during the Auction. Iwao approved of his son's marriage with Yoriko and was seen shedding a tear of happiness during their marriage ceremony. When his son was incarcerated, Iwao fought for him and opposed the Bureau Chief, ultimately giving his life in the process.

Iwao approved of Yoriko marrying his son Takeomi and was seen shedding a tear of happiness during their marriage ceremony. In an omake, Iwao asked Yoriko to take good care of his son and told her that he would like to try some of her bread. When his daughter-in-law was incarcerated and expected to be executed, Iwao fought for her and opposed the Bureau Chief.

Kuroiwa served in the same squad as Urie's father, and was among the members to deliver news of his father's fate to him. Urie has never forgiven Kuroiwa for leaving his father behind, and projects considerable hatred onto his son whenever they meet. He expresses the desire for Kuroiwa to die for his sins, thinking that the loss of an arm is not enough to pay for his supposed cowardice.

This all changed when the two of them planned some kind of revolt against Kichimura Washuu. While walking towards his office, Iwao began talking about Yoriko and his son Takeomi, who actually thinks about Urie in a good way. The two confronted Kichimura together and fought against Roma and Shikorae. They were able to cooperate and defeated the two ghouls. Roma, however, revealed her kakuja form and overpowered the two, leaving them in critical condition.

Urie was able to defeat the two ghouls and tended to Kuroiwa's wounds. In tears, Kuroiwa apologized to Urie for not being able to protect his father against the one-eyed Owl, claiming that it was his fault that he died. Urie shouts out that he wasn't at fault. Having finally made up with Urie, Kuroiwa stated that Urie was just like his father before Kichimura stabbed him in the throat with a katana, fatally wounding him. This left Urie in a state of extreme anger and anguish as he screamed for Kuroiwa.

After Kichimura was driven away, Urie and Marude stayed at Kuroiwa's side until he seemingly died.

The two were fellow investigators and comrades. Kuroiwa was seen participating the 11th Ward Battle under Marude's leadership. After Marude's apparent death, Kuroiwa and Kiyoko lamented the fact that Marude was no longer with them. When Marude made his reappearance to overthrow Kichimura, he was distraught to see Kuroiwa dying from his wounds and told him that he would always be by his side.

The two were fellow investigators and comrades. Kuroiwa brought news of his son's marriage to Kiyoko, and was congratulated by her. The two discussed Akira and the loss of Shinohara and Marude together.

He was a capable fighter being a Special Class Investigator and was able to wound Eto during her second attack on the 2nd ward. In addition, he seemed to recover from his wounds at a greater than normal speed.

Superhuman Durability: Kuroiwa managed to recover from a sword being plunged through his neck by Furuta after a period of time.

Superhuman Strength: He had extremely high grip strength, exceeding that of his son's (who already has more than twice the grip strength of an average man).

Pain Tolerance: Kuroiwa has shown to have a high tolerance for pain as he was still conscious after having his right arm torn off by Roma.

Prosthesis: Since losing his left hand in the battle against the Owl, Kuroiwa had been fitted with an advanced prosthetic one. This hand was durable and capable of blocking powerful attacks as it was strong enough to block Shikorae's kagune, however, the prosthetic hand could easily break off of the stump if enough force was applied. 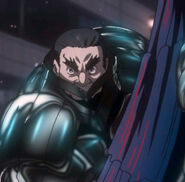