Edit
watch 01:14
'Tokyo Ghoul' Profile: Itori
Do you like this video?
Play Sound 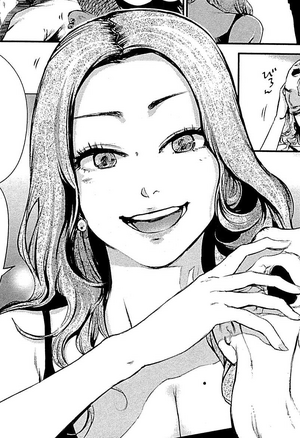 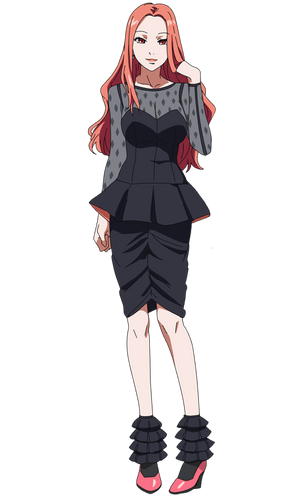 Kanga Ji-young
Itori (イトリ, Itori) is an old friend of Yomo and Uta. She can be found in Helter Skelter bar, where she shares information in the underworld. Itori is also a member of the Clowns.

Itori has long, peachy orange hair, parted down the center and worn loose. She's thin, and typically wears revealing clothes. In the anime, she wears a black corset dress with sheer neck and arms and a ruffled skirt and shoes. She has a voluptuous body and large breasts. In her youth, she has chin-length hair and she often wore revealing clothing as she used this to distract enemies.

Her ghoul mask is a noseless carnival clown mask with a toothy grin. The mask has a heart with three dots as its right eye and a clover as its left eye with spades beside them and a protruding chin. 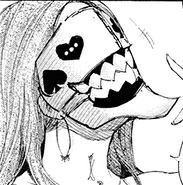 Itori in her younger days. 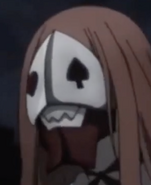 Itori is very friendly and talkative. She likes having fun and even pulling pranks, but she uses people like toys to get the information she wants. She also seems to be an assertive and extroverted woman. Once she is revealed as a member of the Clowns, she shows a more cruel and sadistic side when she gleefully mentions CCG's new goal of eradicating all ghouls. Like all members of the Clowns, she thrives on creating chaos and destruction. She is fond of drinking blood, possibly hinting at her being a connoisseur like Shuu Tsukiyama.

When Uta was the leader of the 4th ward, Itori stayed in his gang in the ward, assisting them in luring investigators into traps at times. After Yomo's arrival, the three ghouls bonded and became close friends and would retain that relationship over the years.

Itori first appeared in the Helter Skelter bar alongside Uta and Yomo where she was fascinated with Kaneki, splashing wine on him and yanking off his eyepatch to see his single kakugan. She makes mention of circulating rumours that somebody had deliberately dropped the steel beams on him and Rize. She planned a trade with Kaneki in which he must give her information about the Ghoul Restaurant from the Gourmet in exchange for information about the person who is responsible for the incident involving the steel beams.

Later on, Kaneki meets Itori in her bar to report on his experience at the Restaurant and to query about Rize. Itori is upset that Kaneki did not get any information, but commends him for trying anyway. Whilst not knowing much about her, Itori still reveals that Rize's first and last name were not her real ones, saying that she suddenly appeared one day and threw her true name away. She says that Kaneki should dig up more information on her from elsewhere, telling him that the truth is hidden many times.

Bringing a list of Cochlea escapees, Kaneki desired a trade with Itori for what she knows about Kanou. She was delighted to see Kaneki's new appreciation of information trading, and stated that although she did not know much about Kanou, she was sure the doctor used to work for the CCG as a coroner. She then got angry at Kaneki for destroying the ghoul restaurant she was researching on.

Nico appeared from the restroom shortly afterwards, surprising Kaneki. Itori assured him that Nico is a harmless friend of hers who only thinks about men.

Itori was celebrating along with other Clown members after the end of the Owl Suppression.[1]

Itori met with other members of the Clowns in the office of CCG Bureau Director Kichimura Washuu revealing the 24th Ward underground as the base of operations for the ghoul residence organization Goat and wonders how divine there destruction will appear.

Itori brings an unconscious Renji Yomo to the surviving members of Goat and propose that they watch the destruction of Kaneki’s kakuja structure. Uninterested in just standing by the members of Goat plan to save Kaneki which causes Itori to walk away disappointed.

Itori appeared later along with Uta, Nico and Donato Porpora viewing the battle between the CCG and the agents of V. Realizing they needed to “play for time” they decided to put to use an Owl-formed kakuja to attack the CCG investigators.

Itori is then seen watching over Uta and Yomo's fight with fascination, commenting on how Yomo has changed since he joined Anteiku and saying how the world will only ever accept humans. As such, ghouls will never feel warmth. She continues on observing, anticipating Yomo's death. When he defeats Uta, however, Itori simply sighs and states that Uta can never change unless Yomo helps him.

It is revealed that Itori, Uta and Nico continued on trying to kill Yomo every now and then whilst retaining their friendship. What she enjoyed the most was what Uta did. She may never tell him her true feelings until the end.

Itori and Uta have been friends for a long time. Itori calles Uta "U-san", she describes her relationship with him and Yomo to be "undesirable yet inseparable". It was later revealed (or very strongly indicated) that she has romantic feelings for Uta.

Itori, Uta and Yomo have been friends for a long time. Itori calls Yomo "Ren-chan." She describes their relationship to be undesirable yet inseparable after Yomo first came to the 4th ward.

She first heard of him as "Eyepatch-kun" working in Anteiku and really wanted to meet him, referring to him later on as "Kanekichi." Itori compliments him as having a kind and pure heart which they lost. While Kaneki first visited her shop, she gave him more information about one-Eyed ghouls. She first spilled a glass of blood wine in his face only to see his kakugan.