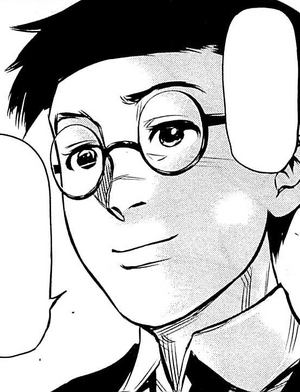 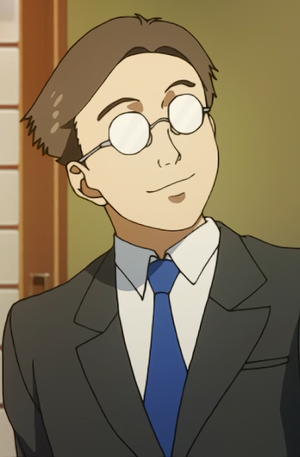 Tomoya Maeno
Ippei Kusaba (草場 一平, Kusaba Ippei) was a Rank 3 bureau investigator working at the CCG's branch in the 20th ward and the partner of Yasutomo Nakajima.

He was killed by Touka Kirishima on November 10th.[2]

Kusaba was a young man with short brown hair and round glasses. Just like the other investigators, he wore a formal suit with a blue tie.

Kusaba showed respect towards the dead even if they were ghouls as he was against grave-digging for evidence. Also, he was shown to be curious about the life of others and kept asking Koutarou Amon about his life and even about things considered to be personal.

Together with his partner Yasutomo Nakajima, Ippei took part in the investigation of Suspect 723 that was led by Kureo Mado and Koutarou Amon. As part of the investigation, he observed Ryouko Fueguchi and noticed that she was visiting a grave.[3]

After Amon secured evidence that Ryouko Fueguchi was connected to Suspect 696, he took part in the attack on her and her daughter, Hinami Fueguchi.[4]

Later, Amon, Nakajima, and Kusaba went to eat after work. Afterward, Kusaba exited the restaurant with Nakajima and revealed to his partner that he admired investigator Amon. Kusaba felt fired up after interacting with him and he vowed to do his best on the job. At this moment, he was killed by the Rabbit.[2]

They had a friendly relationship as coworkers, usually eating out together for lunch.

He respected Amon, wishing to one day be like him as an investigator.

Being a Rank 3 investigator, Kusaba is presumed to be trained to fight ghouls, although to what extent is unknown.