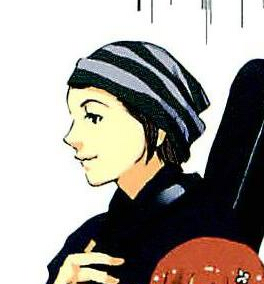 Days: Chapter 1 (Unnamed)
Days: Chapter 4
Ikuma Momochi (桃池 育馬, Momochi Ikuma) is a young ghoul that moved to Tokyo to pursue his dreams of being a musician. He was adopted and raised by a human, and generally prefers to avoid the affairs of his kind in favor of a peaceful life.

Ikuma is a slender young man with short dark hair and a friendly expression who prefers comfortable street wear. He appears to frequently wear a beanie.

Ikuma makes an appearance in :re.

Ikuma is a kindhearted young man, with a passion for his music and a desire to live a peaceful life. He has a compassionate nature, and feels sorrow over having to eat humans to survive. Like many ghouls associated with Anteiku, he is a scavenger and avoids conflict as much as possible.

Dr. Momochi was a recently widowed mother and one night discovered her infant son dead in his crib. In despair, the woman wandered into the rain with her child's body and came across a female ghoul being pursued by ghoul investigators. The ghoul had been mortally wounded protecting her infant, and in a moment of sympathy, Dr. Momochi agreed to switch the children to save the living one. She took the infant ghoul home with her, and passed Ikuma off as her own with the assistance of her parents. His adoptive mother was able to use her position as a doctor to obtain flesh for him, and created fake documentation of severe food allergies to allow him to avoid eating human food.[1]

Passionate about his music, when he reached adulthood, Ikuma left his hometown and moved to Tokyo. He settled in the peaceful 20th ward, avoiding other ghouls and working odd jobs to support himself. During his off hours, he played his guitar and sang for spare change. He traveled to a popular suicide spot in the mountains to obtain food, but abandoned this after encountering Renji Yomo and fearing a territory dispute with a stronger ghoul.[1]

His street performances brought him into contact with Hideyoshi Nagachika, who confessed his worries about his friend. Ikuma offered words of advice to the younger man, cheering him up and forming a friendship between the two. Hide gave him some instant coffee as a gift, and Ikuma gratefully accepted it since he had not been able to eat for some time. While returning home, he was ambushed and attacked by Shuu Tsukiyama — breaking his guitar in the struggle. Chie Hori intervened, pointing out the destructed instrument and causing Tsukiyama to apologize for his actions, offering to replace it out of respect for another music lover.[1]

Severely wounded, Ikuma stumbled towards Anteiku and was rescued by the staff there. Inside, he met Ken Kaneki and talked a little about his past as a ghoul raised by a human. The two bonded over their hope of seeing peace between ghouls and humans, and later on both would learn they had a mutual friend in Hide. After Tsukiyama had his guitar repaired, Ikuma continued to play at parks and stations while doing his best to avoid becoming involved in the affairs of other ghouls.[1]

Ikuma was once again pulled into the affairs of others ghouls during the six months between the 11th Ward Battle and Kaneki's raid of Dr. Kanou's underground laboratory. He told Chie about an Idol Festival being held, and while attending she took a photograph of the idol Mitsuba. This photograph resulted in Tsukiyama deciding to eat the idol, something Chie hurried to prevent. While hiding out in the 23rd ward with Mitsuba, Chie contacted Ikuma to help them.[2]

He ended up stuck as an errand boy, bringing them groceries and gathering information to help in Chie's investigation of Mitsuba's missing family. Just as they discover Kazene Mitsuba's whereabouts, Tsukiyama found them and forced them to leap out a window to escape. Ikuma was revealed as a ghoul, used his kagune to save them from the drop and carried both girls as they ran from the infamous Gourmet. When cornered, he attempted to fight Tsukiyama on his own and lost quickly against the much stronger ghoul. However, Chie's plan to involve Kaneki saved them all and forced Tsukiyama to give up his pursuit. Ikuma aided Chie in reuniting mother and daughter, and Mitsuba kept his identity a secret in gratitude for helping save her life.[2]

Ikuma was among the ghouls that offered their assistance to human authorities. He assisted the police with evacuating civilians, directing the lines and offering words of reassurance to the frightened humans. When several members of V attacked the evacuation and began to kill officers, he protected Detective Kyouhei Morimine by using his kagune as a shield. The attacker cracked his kagune and knocked him to the ground, preparing to finish both men off when Takeomi Kuroiwa intervened. Takeomi's arrival caused the V agents to flee the scene without finishing Ikuma or Morimine off.[3]

The two met when he was attacked by Tsukiyama, and her intervention saved him from further harm. Ikuma considers her a friend, and they share gossip about the goings-on in Tokyo.

Ikuma considers Tsukiyama an extremely dangerous person, a violent Ghoul that nearly killed him during their first encounter.

After being rescued by Anteiku, he meets and befriends Kaneki.

The two become friends as a result of his street performances, and he listens to Hide's worries.

Ikuma is easily frightened by the powerful Ghoul, and pleads forgiveness for invading his territory. It is from Yomo that he learns about Anteiku.

Ghoul Physiology: Due to his ghoul nature, Ikuma has a koukaku kagune, however is a fairly weak ghoul, causing him to avoid conflict as much as possible.