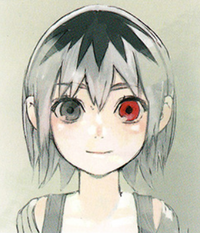 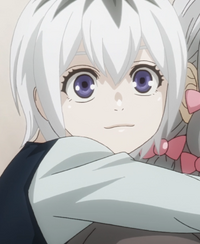 Apphia Yu
Ichika Kaneki (金木 一花, Kaneki Ichika) is the daughter of Ken Kaneki and Touka Kirishima who appears in the finale of Tokyo Ghoul:re.

Ichika has mid-length hair of a light color, with darker roots at the crown, resembling her father's hairstyle during his time as Haise Sasaki. Like most children, she has a rounded face with large, violet-colored eyes, and is usually smiling. Her kakugan is in her left eye like her father's.

Ichika has a very typical personality for a little girl; outgoing and very energetic.

Ichika was conceived prior to her parents' and Goat's time hiding in the 24th Ward. Initially, it was unknown whether it was possible for the baby to survive. After the destruction of Dragon and rebuilding of Tokyo, she was finally born and is treated with great affection by everyone around her.

When the company came to visit the Kaneki household, she was busy braiding and tying ribbons into her great-uncle Renji Yomo's hair. She enthusiastically greeted everyone, and briefly played with them before they meet with her parents.[2]

Sometime later, she goes on a walk with her parents and is swung around by her father.[2]

Ichika is a natural-born one-eyed ghoul. It is not known whether she will inherit the abilities of her parents. Like other natural-born hybrids, she is able to consume human food.

Ichika is very close to her parents. Touka possesses a maternal attitude towards her daughter, even going as far as eating human food to provide nutrition before giving birth in order to prevent her body from consuming the child.

Renji makes a point to spend time with his great-niece, permitting her to do embarrassing things like putting ribbons into his hair.

Tsukiyama spoils her, calling her a princess and praising her as adorable. Ichika seems to like him quite a bit, running to greet him when he visits.

Mutsuki sends fruit as a gift for Ichika. As this is an expensive gift, it indicates a fondness for her.

Ayato visits his niece, also playing with her by making funny faces.