Kyle Igneczi
Hooguro (ホオグロ, Hōguro) is a member of the White Suits and subordinate of Naki.

After Aogiri Tree is disbanded, Naki joins forces with Ken Kaneki, becoming part of his organization named Goat, bringing the White Suits, including Hooguro, along with him.

Hooguro is a slim young man, with blond hair in a chin-length bob that covers his left eye. He wears makeup over the right side of his face and a zebra-patterned scarf. 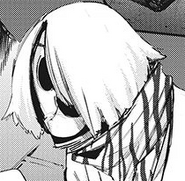 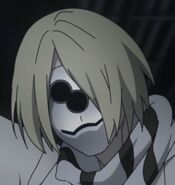 Hooguro's mask in the anime.

Hooguro seems to sometimes take advantage of people, as shown when he asked Kanae for more payment after noting that the employer is rich. Hooguro has also displayed a high degree of loyalty to his boss, Naki, as he said to his fellow subordinate, Miza, that he would kill her if she makes fun of his boss again.

Hooguro is one of the hitmen hired by Kanae von Rosewald to take out the Quinx Squad. He and Shousei distracted Sasaki to separate him from his squad. The two ghouls and their fellow White Suits were easily overpowered by Sasaki though, causing them to flee in fear right after the rest of the Quinx Squad arrived back.

He was later back at the Aogiri base with Shousei where they are told by Naki about Kanou's plan to "revive" Gagi and Guge.

He took part in the ambush of the CCG vehicles following the Tsukiyama Family Extermination Operation, stealing Ginshi Shirazu's body.

During the Rushima Landing Operation, Hooguro along with remaining members of Aogiri Tree and the White Suits engaged Squad 3 in combat. He was one of the few Aogiri members who escaped Rushima.[2]

Hooguro was present during Goat's gathering and Naki and Kaneki's conflict.[3][4]

In the years following the destruction of Dragon, Hooguro fell in love at first sight with a human woman he met at the Unified Front, and married her having a traditional ghoul wedding ceremony. They live together intimately. He devoted his life to serving Naki.

Hooguro has a great sense of loyalty to his boss, as he is willingly following Naki's leadership, even though knowing that Naki is not strategic and that he will meet eventual death from investigators. Hooguro states that the reason he is Naki's underling is because he wants to work for a boss that would remember him even after his death.

Hooguro and Yakumo's exact relationship is currently unknown, but it has been stated that he was once his underling before Yakumo's death. Hooguro also states that he thinks Yakumo is "super cool."

Ghoul Physiology: Due to his ghoul nature, Hooguro has a rinkaku kagune. His rating was assessed by Sasaki to be approximately A+ after he and Shousei fled.