Dankan
Hisashi Ogura (小倉 久志, Ogura Hisashi) is a ghoul researcher. He often goes on TV programs to speak about them.

According to Yukinori Shinohara, Ogura is not an expert researcher but a minor one who takes advantages of any information from other sources to shine in the media.

Hisashi is a middle-aged man with short dark hair and a mustache. During interviews he wears a formal suit. 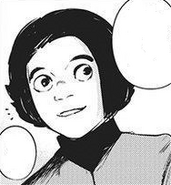 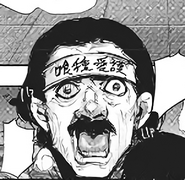 Ogura as a ghoul supporter.

Ogura is a publicity hound who pretends to be an erudite when it comes to ghouls so he can get media attention. He can be very boastful and egotistic as well. During one of his interviews he sarcastically remarks about a news staff's qualification publicly.

After reading Sen Takatsuki's latest book, King Bileygr, Ogura joined many ghoul sympathizers who advocated for "ghoul rights" as he began calling them interesting and very intelligent creatures while wearing a headband that reads "ghoul lover."

Ogura studied at Teihou University, at the Ghoul Research Society. Akihiro Kanou was introduced to him and his classmates. Ogura mentally noted that Kanou looked at them as if they were bugs.[1] At an unspecified point of time, he learns about Kanou's past through an associate.[2]

Ogura was on TV to share information on ghouls due to the recent killings caused by the "Binge Eater."[3]

Hideyoshi Nagachika mentioned to Ken Kaneki that Ogura was making TV appearances after the bureau investigator of the 20th ward, Ippei Kusaba, was killed.[4]

After Eto Yoshimura's revelation to the public that she was a ghoul, Ogura was asked for his opinion on her new book King Bileygr. He had no comment as he was instructed by the "higher-ups" to not talk about it.[5]

To get help for Akira Mado, Kaneki and other member of Goat decided to meet with the Great Wheel Act, the human introducing himself to them was Ogura.[6]

Itsuki Marude summoned Ogura for a meeting. Marude affirms that he would've criticized Ogura for his falsifications, but decided to let bygones be bygones. Ogura assumed that he was convened for information about Dragon, but suddenly Hide arrives into the discussion to ask about Kanou. He then reveals the origins and motivations of the doctor. Ogura questions Marude sending an forage for Kanou, who then responds that he was a specialist.[2]