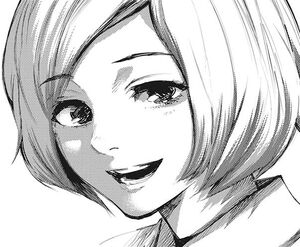 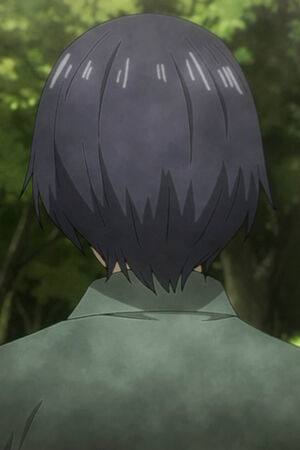 Beth Lipton
Hikari Kirishima (霧嶋 ヒカリ, Kirishima Hikari), née Hikari Yomo (四方 ヒカリ Yomo Hikari), is the late elder sister of Renji Yomo, the late wife of Arata Kirishima and the late mother of Touka Kirishima and Ayato Kirishima who was killed by Kishou Arima prior to the events of Tokyo Ghoul. She is voiced by Yoko Fujita.

Hikari had light-colored hair that had bangs covering her right eye, just like Touka Kirishima.

Hikari was apparently a very 'tomboy-ish' and strong willed woman that Renji Yomo described her as being talkative and strong. She would sometimes tease Yomo with bugs, showing that she had a sense of humor.[1] Hikari's kind and gentle personality only developed after she fell in love with Arata Kirishima. In the past, Yomo recalled that Hikari was a wild child, killing and eating humans. Her children have also inherited her previous wild tendencies which are noted by Yomo.[2]

In Hikari's younger days, she was noted by Renji Yomo to be a wild one, having been known to kill and eat humans. A large number of humans without care and was even hinted to have battled and possibly cannibalized on fellow ghouls as well and due to this destructive track record and her immense bloodthirst, the CCG may have personally categorized her to be a severely dangerous ghoul and had their strongest set out to dispose of her. After having children, she became more gentle and friendly, although she still hunted humans for food, as noted by her younger brother after her death.

Hikari's parents and brother were killed leaving her the sole caretaker of Yomo.[1] They stayed together until she formed a relationship with Arata Kirishima and they started their own family. After she gave birth to Touka Kirishima, Hikari introduced her to Yomo as an infant and promised that no matter what happened, she would always be his big sister.[3] Hikari was killed by Kishou Arima [1] shortly after her son Ayato Kirishima was born.

Renji is Hikari's younger brother whom she took care of after the deaths of their parents and brother. She often teased him as a child, but she loved him dearly. After her death, he sought power in order to avenge her.

Arata is Hikari's husband whom she was married for several years and they lived happily together with their two children until Hikari died protecting her family. After her death, Arata sought power in order to protect their children.

Hikari loved and cherished her children. According to Renji Yomo, they both took after her personality.

Not only did Arima, at the age of 16, kill Hikari, but it is likely that Arima's quinque Narukami came from Hikari since her brother Renji is shown to utilize electricity based attacks and siblings usually have similar kagune.