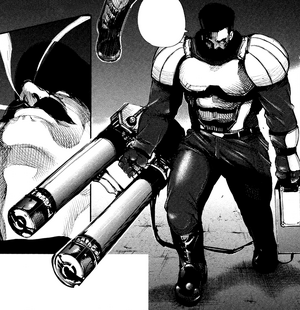 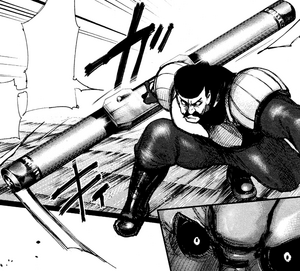 Episode 21
Higher Mind (, Haiā Maindo) or Angel Beat (, Enjeru Bīto) is an ukaku-type quinque that shoots beams of concentrated energy or condensed Rc cells. It is wielded by Mougan Tanakamaru.

It is connected to a briefcase that serves as a power supply. However, without it, the quinque is still capable of gravely injuring a ghoul with a powerful shot after the wire connecting them had been cut. This is done by using the close distance mode change, it does not use much energy and can therefore be operated without the power source.[3] "Compress" can be used for an area-of-effect blast, and "diffuse" to release the same energy as multiple crescent shaped projectiles. Higher Mind is capable of taking down multiple ghouls at once with a large blast.

During the Owl Suppression Operation, the quinque itself had been destroyed by Ken Kaneki.[3]

In Tokyo Ghoul:re, the quinque has been repaired and was used against the escapee ghouls in Cochlea.[4]