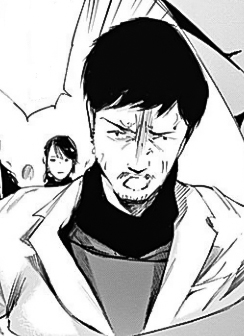 Howard Wang
Hidenori Tateshima (縦島 秀徳, Tateshima Hidenori) is a First Class Ghoul Investigator who participated in the Auction Mopping-up Operation as the squad leader of the Tateshima Squad.

Hidenori is a man expected to be in his thirties, he wears a dark haircut that is fairly short to reveal his ears. He sports a very thin mustache and an inconspicuous light beard.

He is seen for the first time in one of the cars transporting him and his men to the "Zeum Hall" where the auction is located in order to fight. He is next to Fuuma Yukimichi are deputy heads He is under the charge of Inspector Akira Mado, he is the leader of team C.

Hidenori is deployed alongside his group and tries to enter the Zeum Hall, that's when the S-rank ghoul Naki arrives, he notices as a second S-rank ghoul arrives, the three-bladed ghoul Miza. Hidenori's team tries to fight, one of their member Jun Numa is instantly killed by Miza, Fuma and Tateshima then complain about the death of their ally, shortly after Akira appears and declares to them that she is taking care of. the ghoul in their place.

Naki will be temporarily neutralized by Akira, he will then be weakened by Jesse's squad, seeing that he is weakened Hidenori will issue the order to his squad to shoot the ghoul to neutralize it. Naki seriously injured will flee. The operation will finally end with the arrival of a new wave of inspectors, Hidenori will be safe.