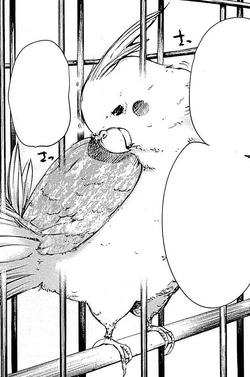 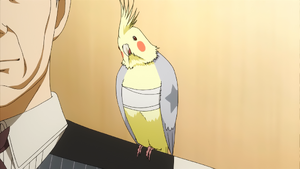 Hetare (ヘタレ, Hetare) is a cockatiel parrot who lived in Anteiku prior to its destruction.

His given name originates from the fact that Hetare (English Loser, Good-for-Nothing, or Coward) is the word he says most frequently. Renji Yomo nicknamed him Shooting Star Wing (シューティングスターウイング, Shūtingu Sutā Uingu).[1]

Hetare is a plump bird with pale, yellow feathers and grey wings. As is common with cockatiels, he has orange circles on his cheeks, and a wispy crest protruding from the top of his head. His most notable feature is the star mark on his left wing, hence Renji Yomo's alternate nickname for him.

Hinami Fueguchi found Hetare injured on the veranda of Touka Kirishima's apartment and made the decision to take care of Hetare until he healed.[2]

The two later decided to move Hetare to Anteiku as a result of Touka's ornithophobia until his real owners could be found.[3]

Yomo stayed at Anteiku overnight, as he was concerned for Hetare's well-being. He also attempted to teach him how to say "good morning," but with no success.[1]

In the months following the 11th Ward Battle, Hetare was kept by Kaneki's group in their apartment in the 6th ward.[citation needed]

After the destruction of Anteiku, the survivors scattered. He was seen with Kazuichi Banjou and Hinami.[citation needed]

He is seen with Ichika and Yomo at the end.