This article is about the sister of Ginshi Shirazu. For other uses, see Haru (disambiguation). 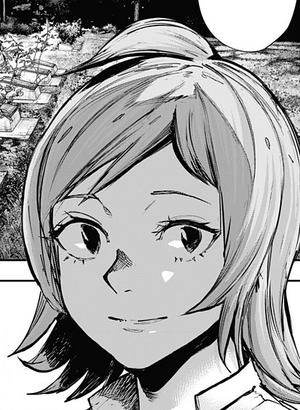 She suffers from a condition known as Rc cell over-secretion disease which causes her to be hospitalized as a result.

Haru was a normal-looking girl prior to the development of her disease, but her appearance has since been drastically altered. She is bedridden with a massive Rc tumor growing out of her face, which at all times must be supported with rope attached to the ceiling of her room. 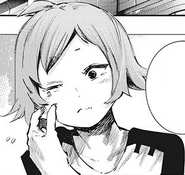 Haru, prior to her disease. 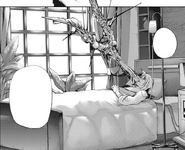 Little is known about Haru's personality, although she appears to have once been a rather ordinary girl.

During her childhood, Haru's mother abandoned the family and disappeared. It appears that her father eventually committed suicide, leaving her older brother with the responsibility of caring for them both. She eventually developed a tumorous Rc mass and was hospitalized. In order to finance her care, Shirazu volunteered for the Quinx surgery and became a ghoul investigator.

Haru is first glimpsed when Shirazu recalls their childhood, back to when she complained about her eyes feeling itchy. He noticed a small bump beneath her right eye, not realizing what it really was. She is then shown in her current condition, hospitalized and surrounded by equipment to support her vital functions with the massive tumor growing out of her right eye. It is then seen as she faintly says "I want to be beautiful," explaining Shirazu's uncomfortable behavior when Nutcracker said the same thing before her death.

Each of the remaining Quinx squad members promised to pay for Haru's hospitalization in Shirazu's stead.

Haru is seen fully recovered and visiting her brother's grave alongside the rest of the Quinx, who have covered all her treatments. When they are done saying their prayers, they invite her over to The Chateau for lunch, to which she happily accepts.

The siblings had been very close, especially with their mother abandoning the family and their father's possible suicide. Her illness motivated Shirazu to volunteer for the Quinx Project, allowing himself to be experimented on and sent to hunt ghouls in exchange for money to provide for her care. Right before his death, he mentions that it would be easier to let Haru die, to prevent her from suffering from her tumor any longer.