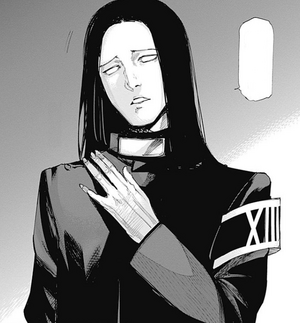 Hanbee Abara (阿原 半兵衛, Abara Hanbē) is a Rank 1 Peacekeeper. He is a member of the TSC's Suzuya Squad and is assigned to the 13th ward, in charge of the investigation of the Nutcracker.

Hanbee is a very tall, slender young man with long black hair. He often appears to have a troubled expression, and his eyes are depicted without irises. Hanbee wears a black suit and an armband with the roman numeral 13 (XIII), supposedly a reference to Juuzou Suzuya's first name Juuzou, which can be alternately written as 十三, or 13.

Despite his terrifying appearance, Hanbee fears for his life and has a low self-esteem, for he is unable to fight the ghouls he is confronted with, fleeing instead. Suzuya describes him as "absolutely unfitting" for the job as investigator, as he is too gentle and scared to fight. Hanbee is presented as very self-conscious of his actions, thinking very long before taking action; often until it is too late.

However, Hanbee is capable of growing, showing courage when Suzuya purposely puts himself in a lethal situation, and interfering with the attack of a ghoul to protect him. Hanbee also wishes to sum up at least a tenth of the courage Suzuya has.

During :re, it is shown that he has gained enough courage to face and actually injure an SS-rated ghoul, as opposed to fleeing like he would have during the events of Joker.

Hanbee is the protagonist of the story, where he introduces the concept and characteristics of ghouls as well as the humans who oppose these creatures-- the Ghoul Investigators. Hanbee mentions his superior and squad leader, Juuzou Suzuya, a First Class Investigator whom Hanbee admires for the courage and bravery Suzuya has. Hanbee frequently refers to himself as “hopeless,” for he usually flees when faced with ghouls.

He attends a meeting, where Akira Mado provides the squad with information about the ‘Skull Masks’ leader; a ghoul whom they were currently investigating at the 11th ward.

On Kurashiki Street, Abara and the rest of the Suzuya squad begin searching for clues. Although Abara is scared, he mentions that he is able to concentrate better when alone, but loses all courage when countered by a ghoul.

As he sees an old man inching up to a young girl, he perceives it as sexual molestation at first. While trying his best to muster up the bravery and stop the crime, Suzuya intervenes and deals with the matter instead, subsequently pointing out Abara’s uselessness. Juuzou then suggests that they follow the man off the train. Abara explains to Suzuya that he was attacked by ghouls when he was a child, and his father tried saving him; losing both his legs in the process. Abara contemplated on saving his father, but despite all efforts, he failed to even gather the bravery.

In an underground section of the train station, the leader of the Skull Masks is seen attacking the molester from earlier. However, Suzuya decides to fight on his own when Hanbee seemed too afraid. After noticing that Suzuya could be in danger when his quinque broke, Abara finally manages to impale the opponent with his katana, saving Juuzou.

The investigation is solved, and as Suzuya suggests that they go to the donut shop, Abara just wishes for at least a tenth of Suzuya’s courage, even though Hanbee is not fit to be an Investigator after all.

The Quinx Squad visits Hanbee for the discussion of the investigation involving the Nutcracker. When asked about Juuzou's whereabouts, Abara makes an excuse, saying that Juuzou overslept, and subsequently discusses the Nutcracker with the squad.

Hanbee later shows up at The Chateau and invites Saiko Yonebayashi and Ginshi Shirazu to lunch before taking them to hospital to see the comatose Yukinori Shinohara.

While the Blades are being ambushed by Juuzou's squad, Hanbee advanced towards their leader and one of the subordinates towards an abandoned building. After eliminating Miza's companion, they soon begin to clash. As Hanbee has the upper hand, Miza kicked his quinque into a wall, trapping it while ambushing him from the top. Hanbee, however, activated quinque's gimmick, effectively piercing Miza and injuring her gravely. He leaves Miza on the ground and decides to wait for the rest of Suzuya squad to show up, but is approached by a robed ghoul who asks him if he is one of Juuzou's subordinates.[4]

While fighting Kurona, Hanbee is easily overwhelmed and pinned to the ground after getting his leg pierced. As he lays down in pain, questioning his loyalty to Juuzou, Kurona states that Juuzou has already abandoned him. Hanbee disagrees, giving her reasons as to why he follows Juuzou, one of them being that he never abandons his squad mates. When he said this, Juuzou leaped in and had begun to fight Kurona.

Abara has great admiration for his superior, viewing Suzuya as a brave person that he wishes to be more like. He isn't bothered by his partner's unusual behavior, instead even being rather fond of it, and is prone to emotional moments whenever Suzuya is happy. He watches over Juuzou in a way, such as watching out for snack crumbs on Juuzou's face, or feeding him pudding in Joker.

Though they have never actually met, Abara knows about Shinohara from stories told to him and has incredible respect for the fallen Investigator. He makes a point to visit the man in the hospital, and hopes to one day live up to his example.

Abara seems to have sharp senses, mentioning that the scent of a crime scene aches his nostrils, and he can hear the breath of every person in the train he boarded during the investigation of the ‘Skull Masks’ leader. As a Ghoul Investigator, Abara wields a sword with a long flat blade held by a hilt.

By Tokyo Ghoul: re, Abara is shown to have improved significantly, to the point where he can easily injure Big Madam, without any second thoughts. By the Rushima Invasion, Abara's abilities have progressed to the point of being able to fight on equal grounds with Miza, an S ranked ghoul. Abara seemed to have recovered from his leg wound by Kurona at a fairly fast rate. Kurona also mentioned that Abara has excellent reflexes.

Swordsmanship: Abara's swordsmanship is delicate and well guarded, he was able to easily slice through pillars and hold is own against an SS-rated ghoul for a short time[4][5]. 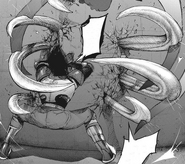