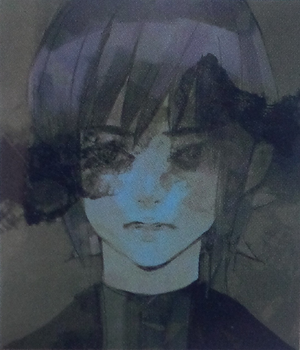 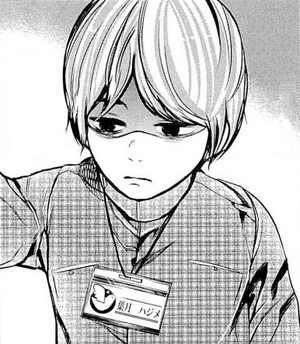 Hajime Hazuki (葉月 ハジメ, Hazuki Hajime) was the squad leader of the Oggai Squad A.[2]

He infiltrated Goat under the identity of Kou (甲, Kō), a young ghoul who escaped from the clutches of the CCG to Goat's base in the 24th ward.[3]

Hajime was a young boy with black spiky hair that had a blue tint to it, with dark blue eyes. 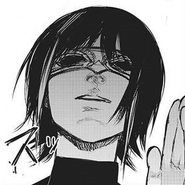 Hazuki as the squad leader of the Oggai Squad A.

As an orphan who lost his parents to ghouls, he held strong feelings of hatred against ghouls and seeked to avenge his family.[4] Hajime was power-hungry and attached to figures of strength, proven when he had shown to idolize Ken Kaneki and his abilities, referring to him as a miracle human.

Hajime was one of the children who were introduced as the newly created Quinx Squad and beheaded the fake Ken Kaneki alongside the other members of the Clowns.[6]

Under the identity of 'Kou', he was attacked by investigators from the CCG, however was saved by Naki before they could take out the young ghoul. Naki took Kou to the headquarters of the Goat organization who now resided in the 24th Ward, where he was introduced to Ken Kaneki by Shuu Tsukiyama.[3] Later, Kou snuck into the computer room of the Goat base and tried to steal the information, though was exposed by Tsukiyama. A fight ensued between the two, where Kou released his kagune and easily defeated Tsukiyama, before being apprehended by the Arima Squad.[4]

Kou, now revealed to be Hajime Hazuki, is imprisoned by Goat and watched over by Fuka.  When the CCG begins its Goat extermination mission in the 24th Ward, Hajime escapes from his cell, killing Fuka in the process.[7]  He is later encountered by Touka, Hinami, and the rest of the fleeing ghouls.[8]  As the two sides square off, Arima Squad intervenes and battles Hajime instead.[9]

Hajime is not seen again until the end of Chapter 143, after Ken Kaneki is defeated by Juuzou Suzuya and Hanbee Abara.  As Kichimura Washuu and the Oggai squads look on at the crippled Kaneki, Hajime is called to step forward, revealing that he had survived his battle with Arima Squad, and presents the severed heads of Shio Ihei and Rikai Souzu. Washuu orders Hajime to stay with Kaneki as he moves onward, and to give him "special treatment".  However, as Hajime approaches Kaneki to capture him, Kaneki suddenly lunges forward and bites off a chunk of Hajime's face.  The young Oggai begins lamenting his disfigurement, but is cut off when Kaneki impales his head with his kagune.[10]

He was attacked by investigators from the CCG, but before they could take him out, he was saved by Goat's Naki who killed the three investigators. He appeared to be grateful to Naki for saving him and after a short conversation he was taken to Goat's base in the 24th ward.

Hajime admired and looked up to Ken Kaneki to a level of severe attachment, obediently idolizing the man, specifically over Kaneki's accomplishments throughout his journey as a one-eyed ghoul. Hajime referred to him as a miracle human. However, after Kaneki is defeated by Juuzou Suzuya and Hanbee Abara and his limbs are severed, Hajime openly mocks him, no longer holding him in such high esteem.

Hazuki possessed a genius level of dynamic vision and motor reflexes and has received the same training as the Arima Squad.[4] 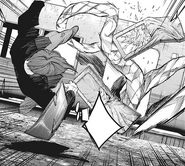