Start a Wiki
Hairu Ihei (伊丙 入, Ihei Hairu) was a First Class Ghoul Investigator and the partner of Koori Ui. She was the deputy leader of S1 Squad.

She was a veteran of the Owl Suppression Operation and served as a member of Squad 0, commanded by Kishou Arima.[7]

Ihei was an attractive young woman, with straight light pink hair cropped into an angled bob. She had very delicate features and a sleepy expression, with heavy-lidded eyes. She seemed to favor men's wear styles with a vest and slacks as opposed to the skirts worn by most female investigators.

When serving as a member of Squad 0, she wore a trench coat with a hood pulled up to conceal her identity.

Ihei relaxing out of uniform. 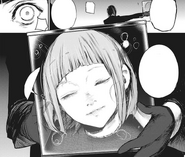 Hairu's decapitated head in a jar.
Add a photo to this gallery

Ihei in the anime.

Ihei in uniform.
Add a photo to this gallery

Ihei came across as a normal young woman, though already a veteran investigator. She eagerly and politely greeted the Quinx, and was happy to finally have met people her own age. Though their superior, she wanted to be treated as their peer and was a bit uncomfortable with how young she was compared to everyone else she worked with. She had quite a tomboyish personality. But also gentle and humble, at the same time.

In battle, however, Ihei was cold and ruthless. She maintained a casual personality in battle, even when fighting and killing ghouls. She had a habit of killing her enemies brutally, and often left behind a gruesome trail of the remains of her kills.

Little is known about Ihei's past, other than the fact that she came from the Sunlit Garden.[8] During her childhood, she knew Kishou Arima and had a positive relationship with him.[5] While lacking a formal education, she was sufficiently trained in combat to begin working as a ghoul investigator at the age of 16. At some point, she was assigned to work in Arima Squad.

She took part as a member of Squad Zero, fighting on the front lines and at Route V14.[9]

Ihei was one of the hooded members of Squad Zero that arrived to help secure the auction hall. Along with her team, she surrounded Hinami Fueguchi and aided in her capture.[10]

Ihei appeared at the S1 meeting alongside her partner, Koori Ui. After the meeting, she approached the Quinx Squad and introduced herself. She noted that they were all the same age — meanwhile, Shirazu blushed and was teased for his awkwardness around her.[7]

She later took part in the ambush of Matsumae and her followers along with Taishi Fura, Shiki Kijima, and Nimura Furuta.[11] She dominantly fought against Matsumae with outstanding performance and she eventually wounded her belly. However, Matsumae had a chance to escape from her when Kijima captured Yuuma, one of her accomplices. Ihei was disappointed that Kijima obtained ownership of Yuuma despite her great action.[12]

She was later put in charge of the vanguard troops for the Tsukiyama Family Extermination Operation's second location, the Luna Eclipse.[13] She easily fought her way in along with Kijima and the other CCG investigators and was confronted by Matsumae, Mairo, and several other Tsukiyama family ghouls near the top floor.[14] After she witnessed Matsumae's kagune-formed sword and shield, Ihei expressed interest in getting it as her quinque. Despite the fight having been more or less on even grounds, she slipped on a pool of blood which created an opening for Matsumae to pierce Ihei with her kagune.[15]

Though heavily wounded, Ihei demanded her subordinates to hand over her other quinque, T-Human. She fired T-Human at Matsumae, and began to break through her koukaku shield. Mairo leaped between the two women and took the fatal blow. He was torn in half, but still able to use the momentum of his leap to attack Ihei. Ihei had a vision of Arima and herself when they were younger and smiled before she was decapitated.[5]

Ui was Ihei's partner. She called him Koori Senpai (郡先輩, Kōri Senpai). Ihei stated that she would work harder than Sasaki and Ui so that she might earn Arima's praise. Her referring to him by his first name implied a close relationship between the two. A flashback in re: Chapter 53 further suggests this. It seems that Ui had romantic feelings for Ihei.

Ihei admired Arima greatly and she wanted to work harder than Sasaki and Ui so that she might earn Arima's praise despite knowing full well that he did not praise anyone. She had known Arima in his younger years and shared a positive relationship.

It has also been shown that she may have had feelings for Arima. In a extra comic, she asked him to play red light-green light with her and used it as an excuse to be able to stare at him as much as she wanted to.

Ihei stated that she wanted to work harder than Sasaki and Ui so that she might earn Arima's praise, although Sasaki's rank was below Ihei's before he was promoted and she called him by his first name without an honorific.

Ihei hoped to get along with them since they were her age. Having worked with mostly older people since a young age, she wanted to experience a classmate-like relationship with them. 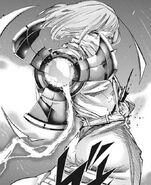 T-Human.
Add a photo to this gallery

T-Human.
Add a photo to this gallery

Retrieved from "https://tokyoghoul.fandom.com/wiki/Hairu_Ihei?oldid=479840"
Community content is available under CC-BY-SA unless otherwise noted.