Goat (, Gōto) was a ghoul resistance organization founded by Ken Kaneki. Their primary goal is to create a world where both humans and ghouls can live together peacefully. Their first plan to achieve this is to bring the CCG to a table by force in order to negotiate.[1]

It gathered surviving members of numerous other gangs and defunct organizations, including Aogiri Tree, Anteiku, and the Tsukiyama family.

After the appearance of the Oggai, Goat’s members were driven to hide in 24th Ward, until it was discovered and attacked by the CCG, led by Kichimura Washuu.

At the end of the battle against V and the Dragon, the organization was dissolved, because most of the members decided to join the TSC and become peacekeepers, to improve the relationship between ghouls and humans and fight against the Dragon Orphans.

Goat is a powerful Ghoul Organization led by a Ghoul capable of defeating the likes of Eto Yoshimura and Kishou Arima and several executives which are rated at least with an S-Rating. Furthermore there are members with formidable battle prowess like Kaya Irimi and Enji Koma, who both have an SS-Rating or Take Hirako, who was told to be one of the two CCG members capable of being the right-hand-man of Kishou Arima other than Koori Ui. The organization consists of the remaining members of Aogiri and ghouls who are driven by the CCG to move to the 24th Ward, including the remaining members of the Tsukiyama Family or café :re. 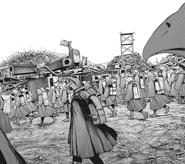 Masks worn by the members of the Goat organization.