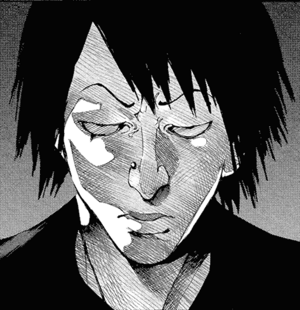 Gil (ギル, Giru) is one of the leaders of the 6th Ward, formerly working for Shachi. He is distrustful of outsiders and hostile towards Kaneki's group.

Gil is a well-built man of average height. He has medium black hair and also dons a distinct blemish above his right nostril.

Gil is a very callous and hot-tempered individual, prone to blunt outbursts over anything that tends to aggravate him. However, underneath this boorish front lies an unwavering dedication and loyalty towards his former leader, Shachi.

When Kaneki's group are searching for Rize they meet up with the leaders of the 6th Ward to try and get information about one of the SS rank prisoners who escaped from Cochlea when the Aogiri Tree raided it, Matasaka Kamishiro (Shachi). Gil is antagonistic towards Kaneki saying he's untrustworthy and a liar, as Shachi was a loyal person who would have come back to lead Ward 6 if he'd escaped.

Later he confronts Kaneki in the street, accusing him of playing dumb about being involved in the massacre of the Ward 7 Ghoul Restaurant. After their fight Gil accuses Kaneki of being a wolf in sheep's clothing and reminding him of 'that stupid brat, without whom Shachi would be...' which Kaneki deduces was a reference to Rize.