The Gas Masks are a gang of ghouls currently based in the 6th ward, and led by Kazuichi Banjou. They are recognizable by their distinct style of dress, which consists of a hoodie and numbered mask styled to resemble a gas mask.

The group originally consisted of Banjou and his three subordinates, then living in the 11th ward. After the ward was taken over by Aogiri Tree, the group was captured and forced to work for the organization while secretly uniting numerous prisoners to form the Anti-Aogiri group. Their failed attempt to escape led to the deaths of several members, and the disbandment of the group. The four core members would then fall under the leadership of Ken Kaneki, helping him to form his own group. This group would also eventually disband, with the core members left without a leader or a goal.

Three years later, Banjou has taken over leadership of the 6th ward. The current gang consists of an unknown number of ghouls, seemingly numbering at least in the dozens. Numerous members join in Ayato Kirishima and Banjou's plan to invade Cochlea to rescue Hinami Fueguchi. 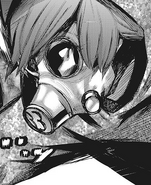