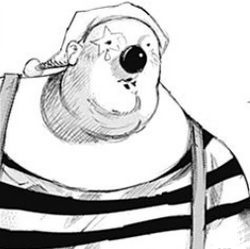 Mark Fickert
Ganbo (ガンボ, Ganbo) was a ghoul and a member of the Clowns. He appeared alongside Roma Hoito as entertainment during the Auction, and was later killed by Takeomi Kuroiwa bare-handed.[2]

Ganbo was a large, heavy-set ghoul dressed in a striped shirt and overalls. He wore a stocking cap on his head, and face-paint with a star over his left eye, as well as a fake clown nose.

He seemed to be fairly simple-minded, behaving in a childish fashion.

Ganbo appeared alongside Roma at the Auction, providing entertainment for the customers. He juggled eyeballs during the opening act and later helped restrain the victims being auctioned off. When Juuzou Suzuya began attacking the audience, he fled off-stage and joined with Uta and Roma in the neighboring building.

There, he joined in the ambush on the Hirako Squad and Shimoguchi Squad, attacking Takeomi Kuroiwa. He was briefly able to gain the upper hand, breaking Takeomi's quinque in the process and almost biting his leg off. However, the young investigator was able to overpower him and break his neck after a brief struggle.[2]

He partnered with Roma, both as entertainment for the audience, and fighting the investigators. However, the two did not seem to be particularly close.

Though associated through their gang, it does not seem they were close. Uta seemed unconcerned about his death.

He seemed to be a moderately strong ghoul, with physical power sufficient to snap a quinque completely in half with a single blow. Otherwise, little was shown of his full abilities before he died.