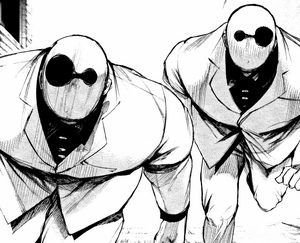 Cris George
Gagi (ガギ, Gagi) and Guge (グゲ, Guge) were a pair of twin brothers, and ghouls who were members of Aogiri Tree and the White Suits. They were always seen in the presence of Naki and served as his henchmen.

The twins were extremely large and well-built. In the anime, they were seen with short dark hair, as opposed to the manga, where they were completely bald. They wore nearly identical white masks, with one smaller and one larger hole for the eyes, just like the emoticons, "O-o" and "o-O". Both wore identical white suits, in imitation with their leader.

The twins acted as a single unit, without any distinctive traits that defined them as individuals. Their speech was unusual, coming out garbled though Naki understood them without issue. Both were deeply devoted to their leader, coming to his aid and attempting to comfort him when problems arose.

At some point in the past, the twins were recruited by Naki and Yamori, becoming members of the fledgling gang that would eventually become the White Suits.

The pair took part in the raid with Naki, fighting against and with Kaneki's group and against the CCG. One of them was almost stabbed by Akira Mado but Naki jumped in front of them and was wounded instead. They carried him to safety as the group retreated.

They were playing on a see-saw with Naki.

They first appeared outside of a toy store where they tried to keep Naki, who was having an emotional breakdown due to the death of Yamori, calm. They kept him company until Kaneki managed to do the job for them and helped Naki spell out Yamori's name on the floor. Gagi and Guge stood beside Naki to keep him safe.[4] During the raid on Cochlea in the 23rd Ward, both brothers were with Naki at all times even when they jumped down along with dozens of Aogiri soldiers and killed the guards stationed there. Naki then faced Akira and fought her while Gagi and Guge fought Amon. Naki got heavily injured and he was most likely carried out by the two brothers.[5]

During the CCG's Owl Suppression Operation, they fought alongside Naki and kept him safe as armies of Aogiri Tree forces emerged and engaged the remaining CCG soldiers after they fought off Anteiku's forces. Naki along with the brothers, were with him as they and Aogiri Troops surrounded a small band of Ghoul Investigators until Arima arrived with reinforcements and everyone began to pull out of the area.[6]

They took part in the fight against the CCG with Naki and the rest of the White Suits. When Naki was wounded in battle with Akira, and surrounded by investigators, they used their bodies to shield him from harm and sacrificed themselves to protect their "Big Brother."[2] Afterward, the surviving members of the gang rampaged to avenge them.

After the Auction Mopping-up Operation, their bodies were taken back with Aogiri where Akihiro Kanou performed an autopsy. From that, he learned they had a unique condition which blocked their flow of Rc cells and prevented them from using their kagune. Otherwise, their kakuhou were very healthy and they would have produced powerful kagune. Kanou planned to use their bodies for future experiments.[3]

The twins were completely devoted to him, following him wherever he went and carrying out his orders. They were loyal to the point of shielding him with their bodies from several Q bullets and the attacks of investigators, not minding their own injuries. They called him "Big Bro."

Neither brother had ever used their kagune, but both were noted for their massive size and incredible strength. Their brute strength was sufficient to challenge powerful investigators, such as Koutarou Amon. Their Rc cells are clotted, preventing them from using their otherwise powerful kagune, as noted by Kanou.[3]

Ghoul Physiology: Having been born a ghoul, both Gagi and Guge possessed great enhanced physical capabilities.