A middle-aged man with short black hair, after several years, his hair turned white due to aging.

He lost his right arm when he fought with Yoshimura prior to the start of the series. 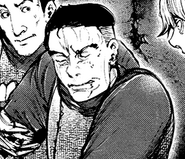 A younger Iba during the fight with Owl.
Add a photo to this gallery

He celebrated with his juniors the suppression of Demon Yamada.[1]

Ten years before the events of Tokyo Ghoul, Iba fought the One-Eyed Owl during Owl's third attack in the 2nd ward. He lost his right arm in this fight.[2] Iba was considered to be one of the most important CCG investigators.

Iba joined Iwao Kuroiwa and Juuzou Suzuya in Shinohara's hospital room after a doctor explained Shinohara's current vegetative state. He told Kuroiwa he should be grateful it was not his dominant arm he lost. Iba happily reflected his time working with Shinohara and Kureo Mado.[3]

As a Special Class investigator, Iba holds considerable battle prowess in comparison to most of his coworkers. He was also noted as a veteran in using bikaku-type quinque.

Retrieved from "https://tokyoghoul.fandom.com/wiki/Fujishige_Iba?oldid=480973"
Community content is available under CC-BY-SA unless otherwise noted.