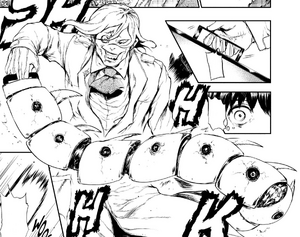 Episode 7
Fueguchi One (フエグチ壱, Fueguchi Ichi), later Fueguchi (フエグチ, Fueguchi), is a rinkaku type quinque made from Asaki Fueguchi. It functions as a long, flat, but wide whip with jagged edges. It's segmented resembling an insect. Fueguchi One is a powerful weapon, able to easily slice through opponents, but is notoriously difficult to handle. It was first wielded by Kureo Mado who, known as a "Quinque Maniac", was quickly able to adapt to it. Fueguchi was later passed down to his daughter, Akira Mado, who took a year to master it.

Being such a long and hard to maneuver weapon, its weakness is that once it's outstretched fully, a quick enough opponent can close in on the wielder before they can retract it. Once Fueguchi One is properly mastered though, this weakness can be overcome. It is sometimes paired with its counterpart, Fueguchi Two.

In the anime it was shown to absorb the blood of Touka Kirishima. No explanation was given for this ability as it was not seen again. 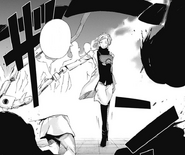