"When there's a power imbalance, it's impossible to stand on an equal footing. Those who are high up don't want to make everyone anxious, so they have no choice but to take a strong stance on everything, and those who are lower down have to be strong and accept everything the leader says."

Enji Koma (古間 円児, Koma Enji) was a ghoul and a former waiter at Anteiku before its destruction. He was also an expert coffee brewer.[4] In his youth, he was known as the Devil Ape (魔猿, Maen)[5] and led the Apes ghoul gang.

Koma typically wears Anteiku's waiter uniform and is the only waiter that wears a bow tie. He has brown hair styled in a pompadour and a bulbous nose. As the Devil Ape, he wears a long white hooded coat with a pair of matching white pants. His ghoul mask is a snarling monkey face with marking on each of the eyes. 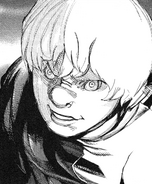 Koma in his younger days. 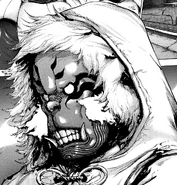 Koma's mask.
Add a photo to this gallery

Koma in his younger days. 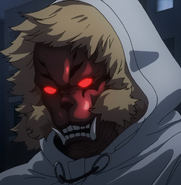 Koma's mask.
Add a photo to this gallery

Koma is a polite, playful and proud waiter of Anteiku who acts as Ken Kaneki's supervisor when Yoshimura is not around. He takes pride in his work as a worker of Anteiku and his former glory days as the "Devil Ape" of the 20th ward. Unlike Kaya Irimi, he is more talkative with his coworkers and has a long association with Yoshimura before his employment at Anteiku. The side stories reveal a more forbearing aspect in lone conversations with his friends such as when he discusses the dualism of leader-subordinate relationship and its consequences for people. In the past, Koma had a more violent and brutal temperament.

A decade prior to the series, Koma was the leader of a violent gang of ghouls that occupied the 20th Ward. He was infamous for seeking out strong investigators to kill, and had a rivalry with another gang, the Black Dobers. He was approached by Yoshimura, who told of his desire to live in human society without unnecessary violence. Attracted by this idea, he began working at Yoshimura's café, Anteiku. Yoshimura at first assigned him to do cleaning duties, which he initially thought of as boring working that anyone could do. However, he quickly understood that Yoshimura had a special reason for doing so. His initial ineptitude at cleaning annoyed a regular customer named Tsubasa. Additionally, his fellow gang members were outraged that Yoshimura had assigned their leader to do such menial work. However, Koma explained that these activities were helping him learn new things. As time went on, Tsubasa became much friendlier towards him. After a few months of his cleaning activities, Yoshimura finally taught him to brew coffee coffee, and he began working at the counter. However, after Kaya Irimi unexpectedly started working at Anteiku Yoshimura immediately taught her taught her how to brew coffee. She quickly took over the counter, and Koma was relegated back to cleaning. This once again enraged his gang members, but Koma calmed them by explaining that Yoshimura put Irimi in charge of the counter to teach her how to step up to a challenge (as she was not as mature as he was). [6] After Touka Kirishima began working at Anteiku, she asked Koma what the meaning of the name "Anteiku" itself was. Koma merely seems amused that she doesn't know. [7]

Koma asks Kaneki to retrieve a container of coffee beans with a large red label from upstairs. After Kaneki comes back with the container, he warns Kaneki that Hinami Fueguchi is eating upstairs and that he shouldn't disturb her, but Kaneki states he already saw her by accident. Koma explains that female ghouls do not like being watched while eating, and he gives him a cup of coffee to give to Hinami as an apology. [8]

Koma was left behind to look after Anteiku whilst the others went to the 11th Ward Base to rescue Kaneki, which he claimed was a sign of Yoshimura's trust of him.

With the threat of the CCG raid looming, Koma - along with Irimi - stayed behind with Yoshimura.

He emerged to defend Anteiku as the Devil Ape, leading his old gang of monkey-masked ghouls, who once occupied the 20th Ward. He and his gang inflicted numerous casualties on the CCG forces until he came into conflict with Special Class Mougan Tanakamaru. In the early phase of the fight Koma maintained a confident mindset when he came to the conclusion that he was the likely winner between the two. After severing Mougan's quinque's cable connecting to what appears to be an external power source, he closed in on the investigator for the final blow, only to be surprised by an attack from the still-operating quinque in another mode. The fight left him severely wounded and at the investigator's mercy until he was saved by Kaneki. He and Irimi managed to avoid Kishou Arima, who was busy fighting with Kaneki, as they escaped through Route V14.

He possessed a deep loyalty to his employer as he gave him the chance to redeem his past actions.

Koma and Irimi appeared to be on good terms, often being seen together and during the Owl Suppression Operation, wondered whether the other was dead. In the past, they were rivals with opposing gangs that clashed frequently. Koma believes he is stronger than Irimi.

He was an occasional mentor of Kaneki's, providing Kaneki with advice on both coffee brewing and life. He was grateful for being rescued during the Owl Suppression Operation and they happily reunite when their respective battles concluded. When Goat is founded he submits to Kaneki's leadership without opposition.

Koma often acted as a mediator in Anteiku, stopping Touka and the other employees' arguments by brewing them coffee.

As a former ghoul in the 20th ward with a large gang that held a lot of territory, Koma is a formidable fighter. Despite his attitude and looks, he is extremely capable, being able to fight on par with a Special Class Investigator for an extended amount of time. He is very proficient in hand-to-hand combat and is agile enough to handle First Class Investigators for a period of time without injury. He claims that he is stronger than Kaya Irimi, who is labelled as a SS-rated ghoul.

Retrieved from "https://tokyoghoul.fandom.com/wiki/Enji_Koma?oldid=480356"
Community content is available under CC-BY-SA unless otherwise noted.