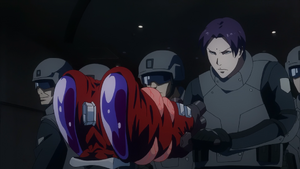 Her usage of the weapon resembles the manner in which the typical ukaku ghoul wields their kagune, firing barrages of crystallized Rc cells taking out opponents at range. However, Emelio appears to sport a somewhat greater accuracy than what ukaku generally display. Like ukaku ghouls, Emelio is said to run out of energy rather quickly, therefore limiting its use to short-term engagements.[1]