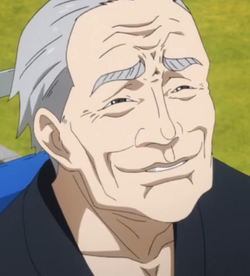 Hiroshi Naka
The elderly patient was a long-time resident at a hospital owned by the Tsukiyama Group.

He is an older man with white hair.

It's unknown what his personality was like, as he suffered from dementia and other age-related conditions. He was infamous for sexually harassing the female staff at the hospital, while playing it off as harmless games. Because of his condition, he was also known for having memory problems and would forget important events.

He is first introduced being observed by Shuu Tsukiyama and Chie Hori, interacting with his nurse. They observe him groping the nurse, and Tsukiyama explains that he is a patient prone to this behavior and also quickly forgets his actions because of his poor health.

Later that evening, Chie sneaks into his hospital room to wait for Tsukiyama to arrive. From his luxurious private room and the expensive gift baskets left for him, Chie estimates that he was a wealthy man abandoned there by his relatives. The expensive fruits purchased as gifts had begun to rot, and while hiding under his bed, Chie observes the nurse from earlier in the day eating the candies left for him.

While Chie remains hidden, the nurse begins to beat him with her slipper and screams insults at him. They are all interrupted by Tsukiyama, there to dine on the rare flesh of a man over 90 years old. He tears flesh from the old man's body, waking him up in the process. The old man falls from the bed and pleads for his nurse to save him, but is kicked away and injured further in the process. After Tsukiyama and Chie depart the room, the old man stirs and threatens to expose the nurse for abusing him.

Chie later relates to Tsukiyama how the nurse murdered the old man, and blamed the death on an unknown Ghoul. She then used the violent attack to make herself out as a heroine that desperately tried to protect her patient, and used the old man's murder to win the heart of a doctor at the hospital.