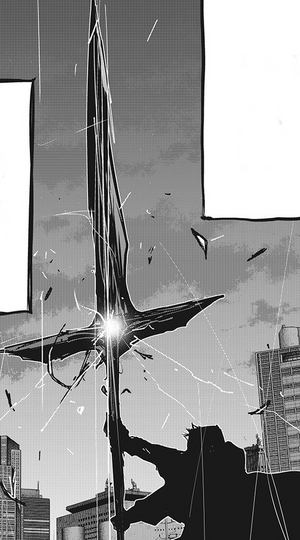 Episode 8 (Original)
Episode 23 (Upgraded)
Doujima 1/2 (ドウジマ1/2, Dōjima 1/2) is a koukaku quinque that takes the form of a club with a big handle suited for two-handed users. It was wielded by Koutarou Amon. It was destroyed by Ken Kaneki in the first fight between the two.

Doujima - Upgraded (ドウジマ・改, Dōjima Kai): Later, Doujima 1/2 was repaired by Akira Mado and Kouitsu Chigyou using the Bin brothers' kagune, taking the form of a spear with a conical lance-like head. For additional offensive power, the bikaku kagune of the Bin brothers can be projected from the spearhead, spiraling around it in a drill-like manner. Using this ability, Amon was able to severely injure Kaneki to the point he couldn't regenerate. It was seemingly damaged once again by Kaneki (this time in incomplete kakuja form) in Amon's first battle wielding the upgraded quinque. However, Amon was still able to use it in his last stand against Aogiri Tree.

In :re, after Amon reappeared as a one-eyed ghoul, he only possesses the quinque's handle. When he wants to use it, he detaches his ukaku kagune to complete its form, making it an ukaku-type quinque.

In the anime, the repaired Doujima 1/2 is identical in appearance and ability to its original form. However, it could be transformed into its new form at the will of the wielder. The quinque's new form is depicted rather differently from the manga. It is much larger and sports a long sickle-like blade from the pommel of its handle. The blade extends along the weapon, ending parallel to the spear-head's tip. An armoured sleeve is also produced, covering Amon's arm. Unlike the manga, it was explicitly destroyed by Kaneki without the use of his kakuja.