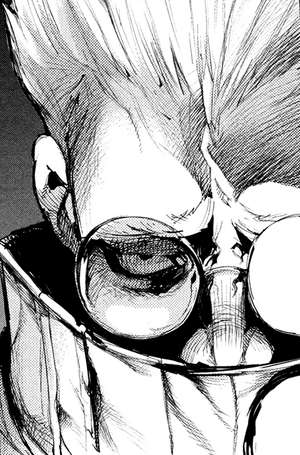 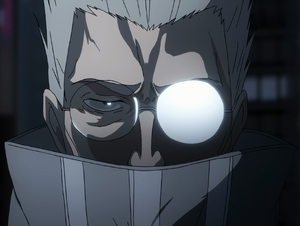 Chuu Hachikawa (鉢川 忠, Hachikawa Chū) was an Associate Special Class Investigator from the CCG. He was the Captain of the Squad 3 in the Owl Suppression Operation.

Hachikawa was a tall and muscular man with round glasses, he had spiky grey hair. It's stated his disfigured lower face was caused by the ghoul gang, Black Dobers, in the past.

Similar to Kureo Mado, he was a human who hated Ghouls due to a tragic past stemming from them, even going so far as to sacrifice an old woman in order to kill Black Dog during Owl Suppression Operation, despite his duty being to prioritize civilians' safety. In spite of this, he does show some concern about the well being of his squad when he ordered his squad to retreat when they were ambushed by Takizawa and Shikorae.

Hachikawa participated in the suppression of the Black Dobers ten years ago but had his entire team, save for himself, wiped out whilst protecting a civilian. His face became permanently disfigured after the incident. Hachikawa's personality became distorted after this encounter.

During the Raid, Hachikawa led Squad 3, fighting Black Dog and her gang. Face-to-face with the Dober Gang once more, he fights intensely to get his revenge. When Irimi came in proximity to a civilian, Hachikawa shot at them both, injuring Irimi who took the blow to protect the civilian. Having injured her, Hachikawa and his squad quickly incapacitated her. Though criticized by Hirako for his actions and told that bringing the ghoul to Cochlea would be the wiser choice, Hachikawa brushed him off stating that he had been waiting for this moment. However, before he could kill the wounded ghoul, he was immediately defeated by Kaneki. After defeating Hachikawa, Kaneki then moved Irimi away from the frontlines.

After the appearance of Eto, Chuu makes his way to the rooftop complaining about his ribs hurting, and engages her with his reserve Quinque.[4]

Hachikawa later orders the other Investigators to cease fire as not to get in Arima's way.[5]

Hachikawa appears at a CCG meeting for the Owl Suppression Squad.

Hachikawa is seen in the Lobby of CCG Main Office alongside Ayumu Hogi and tells Kuramoto Itou to shut up when the latter asks about his suit.[6]

Hachikawa and his team investigate Rushima as a suspected Aogiri hideout.[7] They take out several Aogiri grunts and Hachikawa becomes frustrated with Tooru for not using his Kagune and accuses him of spacing out. They eventually find the hideout and spy from afar as Eto gives a speech to the Aogiri members in attendance, but is spotted by Owl.[2] They attempt to leave quickly before the whole base is alerted but Owl intercepts them by shooting at Ayumu, who dodges the shots thanks to Hachikawa's warning. He makes a remark about Houji to Takizawa, but is caught off-guard by Shikorae, who leaps at him from behind and bites off his nose.[8] Breaking free from Shikorae, he shoots the ghoul with his quinque while ordering his subordinates to retreat. However, Takizawa blocks the shots and retaliates with his own projectiles, destroying Hachikawa's quinque. Unarmed and defenseless, Hachikawa is impaled from behind by Shikorae, killing him. Shikorae and Takizawa then agree to eat his body.[3]

Hachikawa bears an intense grudge towards Irimi for the massacre of his squad during an attack by the Black Dobers, being the only survivor of the incident. [9]

Ayumu is Hachikawa's partner. Despite his rough personality, he still cares for her in his own way, and is deeply mourned by her when he died.

One of Hachikawa's subordinates and a former member of the Quinx Squad. Hachikawa doesn't seem to have much respect for him, quickly becoming frustrated with Tooru and dismissing his abilities.

He was quite capable of close combat, being able to dodge, block and counter all of Irimi's attacks, showing somewhat good reflexes. His skills are enough to earn him a rank as Associate Special Class.