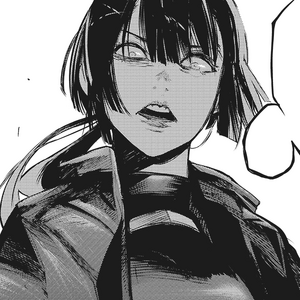 Hsiao is a dark-haired young woman of average height and athletic build. During operations, she wears a long coat, knee-high boots, and long clinging gloves covering the entirety of her arms before reaching her shoulders. Underneath is a tight form-fitting suit with a cutout revealing her lower back.

Compared to her teammates, Hsiao is much more cool-headed and collected. She always displays a calm attitude and always tries her best to execute what is demanded. Hsiao has a focused mindset.

Hsiao was born in Taiwan and came to Japan as a child. She received special education for gifted students at the Sunlit Garden.[2]

She along with the rest of her squad were assigned to the operation to exterminate the ghouls of Rushima. Their squad was ordered by Matsuri Washuu to eliminate the remaining ghouls on the beach.[6] Five days later, she and her squad were still on the island searching for Tooru Mutsuki.[7]

With Urie in the lead, the Quinx Squad arrived[8] in the middle of the fight between Floppy and Mutsuki. Urie shouted orders as they attacked in a set strategy used by Arima Squad, he was confident that Hsiao could take the position of Take Hirako in the formation. They charged as Hsiao flung her coat to the side before Urie made his first attack against the ghoul, Hsiao charged from behind and sent a powerful kick that met at Floppy's front as he turned, causing his attention to shift to her on his front side. Following this attack, she told Shinsanpei Aura to go low, and he stabbed Floppy in the back. The formation went awry when Higemaru was too close for Saiko Yonebayashi to finish the ghoul. After Floppy and the Owl ghoul spoke and Owl planned to leave with Akira Mado and Yumitsu Tomoe, she and her squad, minus Higemaru and Shinsanpei who were both injured, continued to fight against Floppy.[9] As Floppy activated his kakuja, Hsiao attempted to engage him in a battle, only to be quickly repelled and defeated.[10]

Hsiao along with the rest of the Quinx are fighting off the clown onslaught. Urie made the squad split up telling Saiko and Hsiao to take care of some area of Tokyo while he and Higemaru helped protect the firefighters.[11]

Saiko is contacted by Higemaru about the situation with Urie and Donato Porpora, Hsiao along with Saiko and Higemaru immediately rushed to their location until Higemaru fainted. Saiko told Hsiao to call the medical squad before continuing to Urie's location. Once they made it to the building the both of them stumbled upon a framed out Urie. Saiko then told Hsiao that they will save their squad leader while preparing for battle.[12] While Saiko managed to battle Urie with different forms of her kagune Hsiao managed to inject Urie with Rc suppressants after he had left himself open.[13]

After the Clown Siege ended Hsiao watched as the captured clowns and the fake Haise Sasaki were executed by the Oggai during the new Chairman's promotion.[14] Some time later, Hsiao with the rest of the quinx celebrated Takeomi's and Yoriko's wedding.[15]

She engaged in TSC duties. But at 26, she took for a leave of absence due to her poor physical condition. During medical treatment, she cooperated with research studying extended the lives of half-humans. Following that, she returned to the workforce, and became active in places such as office affairs and the intelligence department.

The two appear to have some sort of rivalry.

Hsiao seems to be highly affectionate towards Saiko. When describing Saiko's good points, Hsiao calls her cute and lovely.[16]

Half-human Physiology: Having been born as a failed half-ghoul, Hsiao was granted increased physical capabilities as well as a shortened life span.

Quinx Physiology: Due to being a Quinx hybrid, she possesses a koukaku kagune. Her superior physical abilities are further enhanced by receiving the Quinx Surgery.

Expert Hand-to-Hand Combatant: Her main ability is bare-handed combat, and she surpasses the rest of the new batch of the Qs in that field.

Kuai 1/4: A rinkaku quinque which takes the form of four small blades. It is wielded by Hsiao in a combat rig fashion with each blade attached to her hands and feet, befitting her bare-handed fighting style.