CCG's 20th Ward Branch Office is the headquarters located in the 20th Ward of Tokyo. It is responsible for overseeing the daily operation of the 20th Ward, and responding to all Ghoul-related incidents that occur there. It has been considered one of the most peaceful branches for the last decade, with very few major predations or major targets. 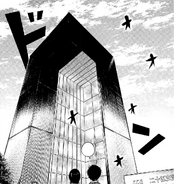 Building exterior.
Add a photo to this gallery

Building exterior anime.
Add a photo to this gallery

Retrieved from "https://tokyoghoul.fandom.com/wiki/CCG_20th_Ward%27s_Branch_Office?oldid=441372"
Community content is available under CC-BY-SA unless otherwise noted.