The Blades (刃, Jin) are a gang under the leadership of Miza alias "Three Blades". They wear distinct masks, and claim the 18th Ward as their territory. They were formerly affiliated with Aogiri Tree until its fall and have since then joined Goat.

The Blades started as a clan of ghouls that fled underground to avoid conflict with human society, living in isolation. Members practiced consanguineous marriages, strengthening their Bikaku kagune but also resulting in genetic deformities such as Dwarfism and poor health. Their small stature and weak constitutions earned them a reputation as easy targets for other ghouls, who nicknamed them "Shaving Razors".

This changed when Miza Kusakari rose to power at the age of 18, taking control over her clan. Under her leadership, the clan established themselves as the Blades and fought many brutal campaigns against other ghouls. They were once prominent rivals of the Bin brothers, but were later absorbed into Aogiri. After the demise of Aogiri by the CCG they shifted to Goat. 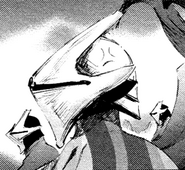 Miza and her subordinates.
Community content is available under CC-BY-SA unless otherwise noted.
Advertisement