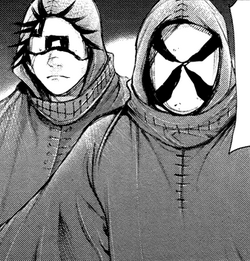 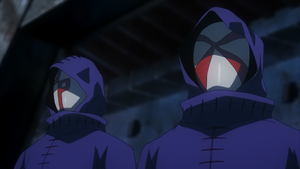 Both brothers hid their face with unique masks featuring different geometrical patterns but wore the typical attire of Aogiri Tree's members otherwise. The older of the two had short spiky hair, black nails and, without the lower half of his mask, slightly sharp cheekbones.

In the anime, they wore purple blue robes as opposed to the maroon ones of other Aogiri members and the brothers had slightly long messy dark hair, shown when they are killed by Koutarou Amon. 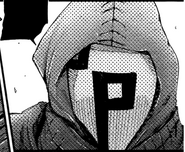 Among Aogiri's members, they had a relatively moderate personality. During a fight, while one was about to be defeated, they used mockery as a means to trick their opponent. They had sworn their allegiance to the One-Eyed King and idolized Aogiri's ideology.

The Bin brothers attended the meeting when Ken Kaneki was brought before Tatara.[6] During Kaneki and Anti-Aogiri's attempted escape from the Aogiri hideout, one of them noticed the plan and attempted to put a stop to it.[7] He succeeded in wounding Kazuichi Banjou but was knocked down and had his mask damaged after a prolonged fight with Kaneki, Jiro, Ichimi, and Sante. A standoff ensued as the second brother arrived before the escape attempt was put to an end by the appearance of Yamori, who captured the rest of Anti-Aogiri. Despite their insistence on it being their job to finish off the escapees, Yamori threatened them to leave things there for him to have fun.[8]

When the Aogiri invasion began, the Bin brothers led squads in exterminating investigator troops until they were confronted by Amon. While attempting to do another combo attack, Amon used his quinque to kill the two brothers in quick succession.[3]

Tomoe, a direct subordinate of Tatara, has been nicknamed Little Bin,[9] and is their step-sister unrelated by blood. She holds them in high esteem, hates Amon, and hopes to avenge them.[10]

Despite being fellow Aogiri executives, they were not on good terms. They had an opposition of intentions and mentality, while the Bin brothers joined Aogiri to revolt for the purpose of a better world for ghouls, Yamori stated he only did it for the fun involved. Thus they are unable to stand him. However, when Yamori asked if they wanted to try and kill him while adopting an intimidating manner, they called him a maniac and left after Nico's interference.

Ghoul Physiology: Being a ghoul, the twins possessed higher physical capabilities. During fights, they were very well-coordinated, executing dual attacks without any words against a single opponent. 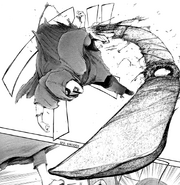 One of the Bin brothers's Kagune.