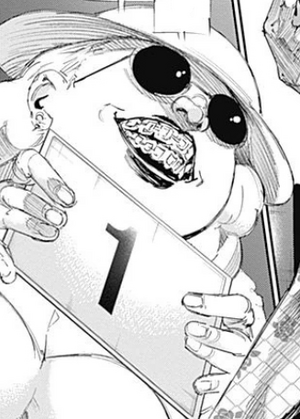 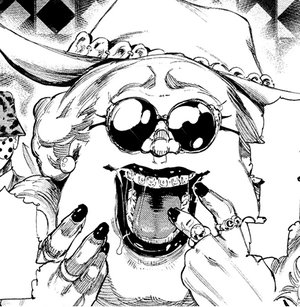 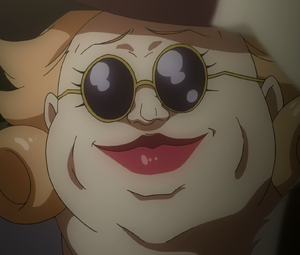 Nancy Sherrard
Big Madam (ビッグマダム, Biggu Madamu) was a powerful and influential Ghoul, with an extensive black market network. In the past, Big Madam raised Juuzou Suzuya as a human "pet" and subjected him to extensive abuse. Nutcracker was believed to be one of their employees, and was considered a major target by CCG.

Big Madam was an obese Ghoul with strawberry-blonde hair, often dressed in luxurious clothing and excessive jewelry. Unlike many ghouls, Big Madam was never shown possessing a mask. Her face was easily recognizable for use of heavy makeup, tinted sunglasses, and braces. Big Madam's biological sex was revealed by the CCG when her corpse was recovered after the auction.

Big Madam was a sadistic individual who took pleasure in inflicting suffering on others. Examples included organizing quite a few auction shows for human goods, as well as lending her pets for Dinner Shows at the Ghoul Restaurant.

Big Madam's wealth was extensive and she was able to afford the highest luxuries. She had a particular appetite for collecting petite, feminine humans, as well as handsome ones. She was able to offer up 200 million Yen (roughly 2 million USD) to buy Tooru. However, her personality was anything but distinguished. She made no qualms about expressing her emotions, and her temper often went unchecked. When she was pleased, she could be feverishly enthusiastic, with an odd habit of drooling with excitement. On the other hand, she was uncontrollably brutal when things did not go her way, acting childishly and lashing out.

Big Madam was an affiliate of Madam A and the Ghoul Restaurant. Previously, "Rei" was abducted as a pet and was given the name "Juuzou", and became a scrapper and entertainer for the audience. Madam also took the pleasure of torturing Suzuya at nights and dressing him as a girl, and even castrated him forcibly with a gavel. Years after, the CCG raided their hideout, but failed to capture Big Madam.

Madam was first mentioned by Abara Hanbee during her Nutcracker briefing to the Quinx Squad about a certain "ingredients list." She was later mentioned by Eto and Ayato during a discussion about the auction.

Big Madam took part in the Auction, excited at the possibility of finding a new human pet. She took part in a fierce bidding war against Croque Monsieur for a famous actor, but ultimately lost. She angrily denied her interest, apparently frustrated at the loss. However, she succeeded in placing the winning bid on Tooru Mutsuki — a record 200 million Yen. Her excitement was short-lived, however, when Suzuya revealed himself on stage and began slaughtering the Ghouls. She quickly recognizes Suzuya.

In the face of the CCG assault, Big Madam retreated along with many of the auction guests to the Zeum hall's underground area. She came into conflict with Kuki Urie when he discovered the guests' hideout. However, Big Madam defeated Urie without much difficulty and swallowed him whole.[3] Urie forced his way out by releasing his F4 Koukaku Kagune, and managed to kill Big Madam's bodyguards, but he was not able to fully control his new power and went berserk in the process. As a result, he was still no match for Big Madam, and had to be saved by Suzuya's squad.[4] Big Madam was severely wounded by Juuzou's "Jason", and begged for mercy. Juuzou said he never hated Big Madam, but merely had to kill her because that was his "job". Infuriated, Big Madam said she had never loved Juuzou but was immediately killed by the Squad members. As Big Madam was killed, Hanbee covered the saddened Juuzou's eyes and ears, as he said his final farewell and addressed her as "father".[2]

As a child, Suzuya was one of Big Madam's pets and her favorite executioner. She called him "Juuzou" in the arena; a name he would later adopt as his own. Suzuya and Big Madam's relationship was a torturous and abusive one, with its highs and lows. After every show he performed, she would give him "points" depending on how good he was that day. Every point chalked up to one stitch with a needle-- perhaps how he learned how to body stitch. Suzuya was kept in a dungeon during the majority of his time with Big Madam. On the other hand, Big Madam would sometimes be affectionate to her pet. In one of Suzuya's flashbacks, he remembered one of the rare occasions when Big Madam would play and read books to him, not unlike a mother.

Big Madam also loved to dress Suzuya like a doll, thrilled with how lovely he looked as a girl. However, she was unnerved by the possibility of him growing up to look masculine. She decided to crudely castrate him with a hammer, leading to Suzuya's current androgynous appearance.

Big Madam had a strong obsession with Suzuya. When she recognized Suzuya at the Auction hosted by the Clowns, she was overly excited, calling him "Juuzou-chan" and frozen in awe. When she is at his mercy, she desperately tries to appeal to him as her "son", asking him if he would really kill his mama. When this approach fails, she lashes out, telling him how she never really loved him. Their twisted relationship was therefore defined by cycles of affection and violence, alternately showering "Rei-chan" with kindness and brutalizing "Juuzou".

Big Madam was supposedly Nutcracker's employer for the auction sale, while Nutcracker was in charge of bringing humans to the auction.

Ghoul Physiology: Having been born as a ghoul, Big Madam possessed great physical capabilities. Although she was usually accompanied by ghoul bodyguards, she possessed an SS rating by herself and was more than capable of holding her own. It took an extensive team of skilled investigators and Quinx for her to be exterminated.