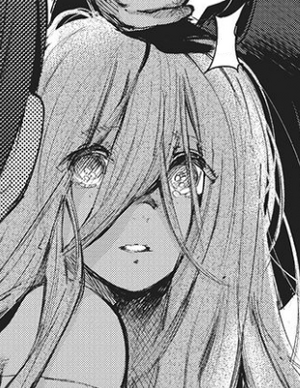 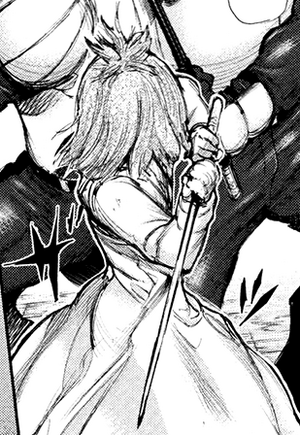 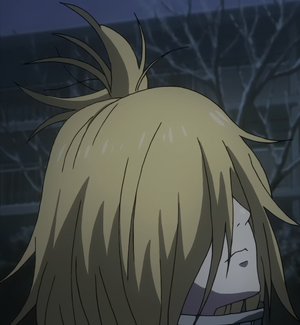 "No matter who that person is, if there's one good memory, it's hard to hate him..."— Ayumu Hogi, Tokyo Ghoul:re Chapter 63

Ayumu Hogi (穂木 あゆむ, Hogi Ayumu) is a First Class Peacekeeper from the TSC and the Deputy Squad Leader of the Hachikawa Squad who was part of the Squad 3 in the Owl Suppression Operation.

Ayumu is a short girl with messy blonde hair that usually covers most parts her face. It is revealed that she has a young round face with freckles, but since she hates her freckles, she conceals it with her hair.

Ayumu rarely talks and she is more focused on the battle. She feels insecure about her freckled face, hence the peculiar hairstyle she dons.

She is also quite friendly as she seems to have a liking to her superior, despite admitting that he is universally disliked.

Ayumu was part of the Squad 3 led by Chuu Hachikawa and later fought against the Black Dog with her squad. She eventually managed to help defeat the Black Dog, but her quinque was destroyed by Ken Kaneki - making her unable to fight.

After the appearance of Eto, Ayumu made her way to the rooftop and engaged Eto in combat. She was seen flipping over an attack that killed two of her comrades.

Ayumu was in the lobby of CCG Main Office alongside Chuu Hachikawa and she was asked by Kuramoto Itou about her suit.[1]

As part of Hachikawa's squad, she was sent to investigate Rushima after it became suspected of being Aogiri's hideout.[2] There, they encountered Aogiri ghouls who were quickly disposed of. She and the rest of the squad located Aogiri's hideout where they spied as Eto gave a speech to the gathered Aogiri members. They were spotted by Owl.[3]

After Shikorae attacked and ripped off Hachikawa's nose and spits it out, Ayumu tried to attack him head on but the ghoul managed to dodge all of her moves. When Hachikawa was killed, Ayumu screamed out his name and was pulled away by Tooru Mutsuki, telling her they were going to jump off the cliff into the water to escape. One of Shikorae's projectiles managed to scratch Ayumu as she and Mutsuki plunged into the ocean below.

In a small cave, Mutsuki provided basic first aid to Ayumu's arm and talked about Hachikawa. She talked to him about Hachikawa's past and that despite Hachikawa's foul-mouth and his bad reputation due to his greed, she still liked him. In the past, when she told him why she hid her face he said it was stupid and asked her between his face and her freckles which was better. She added that no matter who the person was, if you had one beautiful memory of them, it was hard to feel disgust for that person.

She was then suddenly attacked by Torso, who grabbed her by the hair and bashed her against a wall, terrifying Mutsuki.[4]

She survived Torso's attack and escaped back to the CCG Headquarters. Ayumu attended a meeting with Matsuri Washuu and Yoshitoki Washuu to recount the events she witnessed at Rushima.[5]

A month after the operation, she went to fetch Mutsuki who was conversing with Saiko Yonebayashi.[6]

Hachikawa is Ayumu's former partner. Despite his coarse personality, Ayumu found Hachikawa hard to hate because she had fond memories of him. He made Ayumu feel better about her insecurities in his unorthodox way and she grew to respect him.[4]

A former member of the Hachikawa Squad. Mutsuki and Ayumu worked well together and would back each other up on the field and comfort each other emotionally. Mutsuki understands Ayumu's feelings of not being able to hate someone if they have one good memory of that person.[4]

Swordsmanship: Ayumu has shown to be quite proficient in wielding her quinque as shown when she fought the Black Dog and Shikorae.