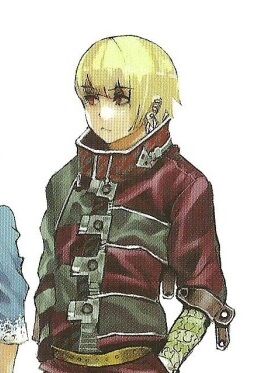 Void: Chapter 2
Asa (アサ, Asa) is a young ghoul originally from the 4th ward, and an amateur mask-maker. She is a great fan of Uta, and desperately wishes to be his apprentice.

Asa is an androgynous young woman, with short blonde hair and a very slim build.

Asa has a fierce personality, with strong emotions and a tendency to lose her temper. Even so, she is a kind person and warms up quickly to people once she gets to know them.

Ghoul Physiology: Due to her ghoul nature, Asa has a rinkaku kagune.

Asa has adored Uta since a young age, having grown up in the 4th ward during the time when he was its leader. Even after moving to the 23rd ward, she continued to bother him about becoming his apprentice.

Asa and the elderly woman initially did not get along at all, but through Uta's careful actions, the two quickly grew close. She ended up developing a strong bond with the human, essentially becoming her apprentice without realizing it. After her death, Tsumugi left her home and possessions to Asa to start a new life.