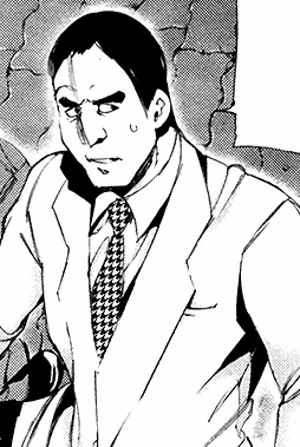 Arine (有根, Arine) was an Associate Special Class Ghoul Investigator. He was killed pursuing the Black Rabbit in the 7th ward.[2]

In the past Arine took part in the battle against the Clowns during which he achieved results rivaling those of Houji.[4]

Arine is a fairly tall man, he wears short black hair, he wears a long white jacket with a tie with black and white patterns. He wears a white shirt under his jacket, his face is quite elongated.

Arine is seen patrolling the 7th ward with his partner Niharu. The two inspectors then stumble upon a winged ghoul. The tandem of inspectors will then be observed facing the ghoul, Arine will tell Niharu not to move for the moment. They will not have time to cause the slightest damage as the ghoul will defeat them by slaughtering them in a single stampede. Before they could even know it, the lagoon would have already turned the bodies of the two inspectors to lint as Arine spoke.

Arine's decapitated head will then fall to the ground, while the identity of the Ghoul will be revealed to us: the Black Rabbit.

After his death Amon and Akira used the surveillance videos that filmed the death of Arine and Niharu to advance their investigation into this ghoul.

Arine and Niharu are killed by the Black Rabbit.