Edit
watch 01:13
Who is Arata Kirishima?
Do you like this video?
Play Sound

"It's certainly true... that there are many humans. But we also have our own world. And in order to protect that world we have to keep enduring everything."— Arata Kirishima, Tokyo Ghoul Chapter 70

Arata Kirishima (霧嶋 新, Kirishima Arata) is the husband of Hikari Kirishima. He is also the father of Touka Kirishima and Ayato Kirishima. A group of ghoul investigators named him the Corpse Collector (骸拾い, Mukuro Hiroi).

Yukinori Shinohara and Kureo Mado had exposed Arata's identity,[2] and the investigators were subsequently able to catch Arata.[3]

Arata is a slender man of average height, with short dark blue hair. His manner of dress was never particularly noteworthy, besides wearing a large overcoat while scavenging to disguise himself. Neighbors described him as being very slim and possibly even in poor health.

In his younger days, he resembles Ken Kaneki.

Virtuous and gentle, Arata is another pacifist ghoul who is content to live peacefully with humans and wants the same for his children. Being a scholar and a reader, Arata embraces the human life by cooking human food and consuming it, even if he and his kids cannot digest it. The human qualities to blend into both human and ghoul worlds are traits he believes Ayato and Touka should learn in order to live happily. He shows to be somewhat of a renaissance man; knowing how to craft, cook, and socially interact well with human acquaintances.

The death of his wife had a profound impact on Arata, causing him to thirst for power so that a similar tragedy would not unfold again. This desire ultimately caused him to scavenge for the corpses of ghouls and humans alike, seeking to become a kakuja in order to protect his family. During their confrontation, Ayato angrily exclaimed he hated Kaneki because he resembled and reminded him of Arata.

However, according to Touka, Arata has a rather brutal side to his kind personality. Unable to cope with the death of his wife, he resorted to killing both ghouls and investigators behind his children's backs as revenge for his wife's death.

At one point, Arata met his wife Hikari and had two children with her. When Hikari was killed by Kishou Arima, Arata was confronted by an infuriated Renji Yomo, who blamed him for his sister's death. Yomo's words, combined with the guilt he felt for not being able to stand up for his family, made him seek power and he began scavenging both human and ghoul corpses.[4]

Arata moved into a neighborhood in the 20th ward, hoping to start a new life with his family so they could live peacefully. He taught his children that living as both a human and ghoul would mean that they would have to endure hardships in order to protect their way of life.

Arata used to take his children to the library to read and study, allow them to take care of birds, and he even convinced them to eat human food in an attempt to teach them the ways of a human life (in order to make them learn to coexist peacefully with humans). Whenever he went to collect corpses, Arata would leave his children alone in the house. On the night before he vanished, Arata asked his children to promise him that they would protect and watch over each other.[2]

Later on, he was found by Kureo Mado and Yukinori Shinohara. His whereabouts were established through traces left behind by his kakuja. What followed was a life or death battle with the CCG until he was eventually secured.[5] Thereafter, he was subjected to the harvesting of his kakuhou, which is being used as the CCG's exoskeleton armor quinque, respectively named "Arata."

His wife. Arata loved Hikari, and felt great guilt because of his inability to protect her.

Touka is his eldest daughter, he saw it as a reflection of his mother's always brutish and courageous demonstration as she and her brother collect a bunch of earthworm for the bird they found injured on the ground.

Ayato was his youngest son, his relationship to him and Touka was practically the same as a father would have for his children, making them swear they would protect each other even Ayato seeing his father as a weak and many offending him in front of Touka.

Despite his relationship with his sister, Yomo and Arata did not have a good relationship, demonstrating this when Yomo was extremely annoyed Arata was weak and could not protect his family, who soon would come to regret on Yomo, for have lost both of them.

Ghoul Physiology: Having been born a ghoul, Arata possesses enhanced physical capabilities along with a koukaku kagune, and a kakuja obtained from continuous cannibalization.

Arata cannibalizing and developing a kakuja. 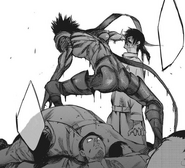