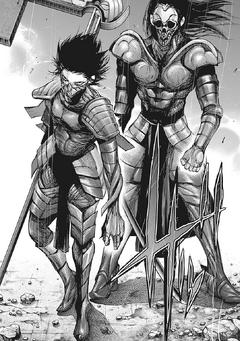 Episode 13 (Arata proto)
Episode 16 (Arata β 0.8)
:re Episode 15 (Arata Joker)
Arata is a series of auto-equipping quinque made from the kakuja of Arata Kirishima — the Corpse Collector. It enhances the user's physical abilities beyond those of a normal human, so that they are able to keep up with SS-rated and SSS-rated ghouls, even though momentarily.

Arata proto (アラタproto, Arata puroto) or Arata β 0.8 (アラタ 0.8, Arata Bēta 0.8) was first used by Special Class Investigators Iwao Kuroiwa and Yukinori Shinohara against Yoshimura. The latter of the two investigators even commented that they would have been already dead in the battle if they did not have the Arata. The armor has a disadvantage: as time progresses, the toll on the subject will accumulate; and in consequence, the towering strain.

Arata proto • Ⅱ (アラタ・弐<proto>, Arata Ni puroto) is a revised version of the original prototype, encasing the user's body and face almost entirely as well as an increase in power. Nonetheless, it still puts an immense burden on Koutarou Amon in order to fight Kaneki. Even though breaking, it was capable of causing heavy damage to Kaneki as well, enough so that their fight could be considered a draw. If continued, they likely would have killed each other.

Arata Joker (アラタJOKER, Arata Jōkā) is an advanced version of its predecessors. It has increased power and speed and can more efficiently combat rinkaku ghouls. It is used by Juuzou Suzuya, who gained enough strength to overpower Kurona Yasuhisa in her own kakuja form. This version of the Arata armor also includes claw-like blades attached at the hands, as well as several protrusions coming from the upper back area that is used for offensive purposes. Thus, this is effectively the first type of Arata to come with its own weaponry.

Arata Ⅱ is the latest version of the quinque. As with its predecessors, it can encase itself around the user's body to defend them from the assault of SS and higher-rated ghouls. This version fully covers the user's face with a skull-like mask and though its full abilities aren't shown, Arata II was capable of defending Hanbee Abara when engaging Ken Kaneki in his kakuja form, Abara showing no serious injuries thereafter.