"Aogiri Tree exists to create a good world for us ghouls, a world in which ghouls can live openly and freely. Our enemy are the Doves of the C.C.G. However, eradicating the warped root that lurks behind all of this is my true aim."— Eto Yoshimura, Tokyo Ghoul:re Chapter 61

Aogiri Tree (アオギリの樹, Aogiri no Ki, lit. Chinese Parasol Tree) was a ghoul terrorist organization founded by Eto Yoshimura. They actively combated the C.C.G, inflicting heavy casualties on them. In recent years, the organization had grown in power, becoming a large threat to the C.C.G and developed a notorious reputation among ghouls, and was one of the C.C.G's most pressing priorities.

The organization had its roots in the 24th Ward and was founded by Eto after she and her small band of ghouls were defeated by the C.C.G 13 years prior. Because of that, Aogiri had structural similarities with the first organization, as stated by several C.C.G investigators. Aogiri was stated to be commanded by the mysterious One-Eyed King, a figure surrounded by rumor and unseen by all but its direct subordinates. Many believed the One-Eyed Owl was the King, but Eto stated that was not the case. Despite being the organization's founder, Eto often acted behind the scenes and was shrouded in mystery to most, even amongst some of her own members. Tatara, a direct subordinate of the King, served as the operational leader of the organization, meeting with members and giving out orders to subordinates. Noro was another direct subordinate of the King but was usually only deployed into combat to quickly dispatch multiple enemies.

Eto once explained the origin of the group as she led a small band of ghouls in a raid against the C.C.G. In the end, most were killed and her arms were taken by a muscular youth with thick eyebrows. She then brings up the previous year, when a similar thing happened. She claims that she was overconfident and, being taught a lesson, decided to form Aogiri. Today they have several thousand members but their goal remains the same. According to her, Aogiri Tree exists to create a good world for ghouls. Her true aim is to eradicate the warped root behind C.C.G and requests the assembly participants to become foundation of the destruction of the birdcage.

Beneath Tatara were several executives, powerful ghouls who served as captains for the organization and led their own forces. They were responsible for much of the daily managing of the organization, such as gathering food and overseeing missions. Each executive had their own direct subordinates, some of which formed into distinct gangs of their own, such as the White Suits. Lower ranked members dressed in matching robes and masks, and carried out minor tasks, such as information gathering, scouting, and guard duty, or even kitchen duty.

Aogiri actively seeked out new members with each new territory they controlled. During the occupation of the 11th ward, numerous weak ghouls were conscripted into the organization and used for menial slave labor, and in the break-in at Cochlea, Aogiri recruited several A to SS-rated ghouls, one notably Shachi. After the fall of Anteiku, Aogiri expanded its influence and forced ghouls living within human society to work for them. These ghouls were responsible for gathering information, or carrying out other minor tasks their human identities made them uniquely suited towards. Should these ghouls have be discovered, Aogiri would recruit them fully into their ranks as new soldiers.

During the Rushima Landing Operation, the organization suffered a loss of approximately 98% of its remaining members. Though a small number of prominent members escaped, the C.C.G has designated the organization exterminated. However, Tatara and Eto had intended for Aogiri Tree to be completely decimated. The surviving 2% of its members evacuated and became members of the organization Goat established by their founder Eto's designated successor to the title of One-Eyed King: Ken Kaneki.

Aogiri Tree had multiple locations under their control, though the exact specifics such as the scale are currently unknown.

There used to be a prominent Aogiri hideout in the 11th ward, under the supervision of Tatara and several executives such as Ayato, Yamori, and the Bin brothers. The hideout was destroyed after the CCG carried out the Aogiri Raid Operation, their location unintentionally leaked by Yamori through Hideyoshi's hobby of playing detective.

The Aogiri executive Miza was the current leader of the 18th ward, thus was technically under the Aogiri Tree's jurisdiction as well. There seemed to be a decent amount of Aogiri activity in the area.

Aogiri had established a base of operations on Rushima, an uninhabited island in Tokyo Bay formerly used as a military base during World War II. The CCG was poised to destroy the organization and Aogiri made a final stand against them.

The Aogiri Tree was united under the ideology of ghoul supremacy as promoted by the One-Eyed King. Aogiri sought to make ghouls the dominant species and planned to overthrow humanity and ascend to power. Rize Kamishiro had been hunted down and tracked by several Aogiri executives and members for an unknown purpose. It was stated by Nico that Aogiri, in the words of Tatara, wanted to obtain Rize and Dr. Kanou "to flush out a liar."

Aogiri's goals seemed to align with Dr. Kanou's, as he himself stated, and that cooperation was mutually beneficial to them. Eto adopted his "birdcage" parallel and stated Aogiri's purpose was to destroy this "birdcage" and restore balance to the world. The organization had provided him with advanced facilities and the subjects to continue his research into creating artificial one-eyed ghouls.

As an organization of ghouls, Aogiri Tree was considerably powerful. CCG had stated that Aogiri was one of the greatest ghoul threats to have surfaced in recent years. In terms of manpower, Eto mentioned the organization had several thousand ghouls in their ranks,[1] the majority of low-ranked members were B-rated or below.[2] The upper chain of command consisted of many ghouls S-rated or higher like Miza, Ayato, Tatara, Takizawa and Naki with his White Suits, a further testament to the organization's strength.

After the Tsukiyama Extermination Operation, the intensive crackdown on their operations by the CCG significantly weakened Aogiri. But they managed to remain as one of the most powerful ghoul organization opposing the CCG.

However, following the conclusion of the Rushima Landing Operation, they lost the majority of their members as well as Tatara. With no leader and almost no members, Aogiri Tree ceased to be a threat. 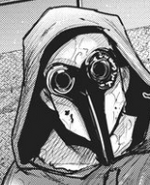 The symbol on Aogiri robes.

A meeting of the leaders.