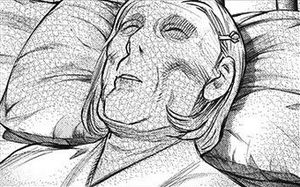 Re: Chapter 148
Akihiro Kanou's mother was hospitalized because of an undisclosed chronic illness. She succumbed to her illness shortly before her son entered university.[1]

She was a wan looking woman with shoulder-length hair.

Kanou was said to had visited his mother in the hospital everyday without fail until she passed away. Hisashi Ogura hypothesized that she was the motivation for Kanou's life long dream of becoming a doctor and his current research.[1]