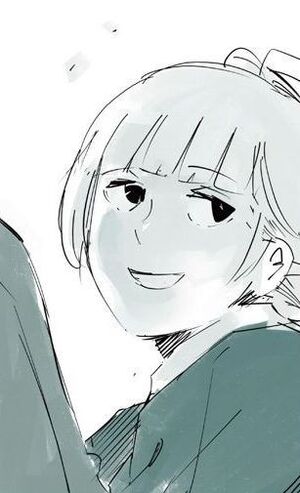 Rumi Ōkubo
Aki Sasada (笹田 アキ, Sasada Aki) is the childhood friend of Taishi Fura and Ryou who lost her right eye when she was attacked by Lantern. In the same attack, Ryou was killed.

She eventually married Taishi where she takes his family name Fura in the process and the two currently have one daughter together named Natsu Fura.

Aki is a petite teenage girl with short light-colored hair that has square bangs covering her forehead and dark-colored eyes.

Aki has an outgoing personality who always indulging in fun and frolic. However, she put these things ahead of her academics, as she rarely attended school, and was on the streets with a gang of bikers in a police pursuit. After Aki lost her right eye, she expressed great regret for all the times she gallivanted and played around; implying that her injury and Ryou's death were her punishment for her carefree attitude.

As an adult, her personality seems far more settled. Taishi Fura mentions that she disapproves of him smoking at home, because of their daughter.

Aki is a childhood friend of Taishi Fura and Ryou where the three grew up together and became delinquents in high school. During a night out riding motorcycles and eluding police, the group was attacked by the Ghoul Lantern. Two unnamed friends were killed, and Lantern ambushed the survivors before attacking Aki. Her right eye was slashed out during the attack and her boyfriend, Ryou, sacrificed his life to save Fura.

In the hospital, Aki underwent a change of heart and tells Fura that she was being punished for her crimes. She resolved to make amends for her delinquent past, though Fura told her what killed their friends was not a demon but merely a Ghoul.

In the years following the incident, Aki eventually married Fura and moved to the 7th Ward after he was given command there. A year prior to the events of Tokyo Ghoul, Aki gave birth their first and only daughter, Natsu Fura.

Taishi Fura explains to Koori Ui that his wife disapproves of him smoking at home, so he likes to do it at the office instead. He later relates to Ginshi Shirazu how Kishou Arima saved Aki and him from a Ghoul.