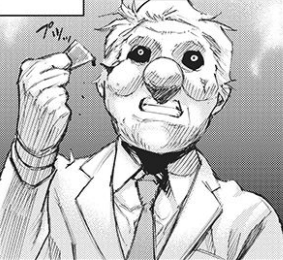 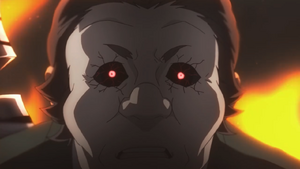 Takaaki Uchino
Akashi Kobayashi (小林 昭, Kobayashi Akashi) is a ghoul that resided in the 1st ward, working as a taxi driver.

Kobayashi is a short, stout man, with plump cheeks and appears to be in his fifties. As a taxi driver, he wore a formal suit and tie.

As a way to blend in with the human society, Kobayashi often portrays himself to be quite a cheerful, friendly man. While his occupation is associated with transport, his main hobby is making confections; something he finds comfortable, but is flustered about admitting. As a ghoul, Kobayashi seems proud of the extraordinary sense of smell his nose possesses.

Suspecting Torso, his target, to be a taxi driver, Kuki Urie boards Kobayashi's taxi in an effort to capture Torso. Urie perceives Akashi's friendly facade to be fake, and orders him to halt and confronts him. Urie then battles, and eventually incapacitates Akashi. As Urie is about to kill him, he is stopped by Haise Sasaki.[1] Later on Akashi is revealed not to be Torso. He is imprisoned in Cochlea.[2]

Ghoul Physiology: As Akashi is a ghoul, he posseses a kagune and quick reflexes.