The 24th ward (24区, Ni-jū yon-ku) encompasses the deepest parts of the large labyrinth that the ghouls dug in Tokyo's underground in the past. It has also been stated by several characters, the most notable being Touka Kirishima, that it is by far the most horrible out of all the wards in Tokyo due to the difference in human to ghoul ratios.

The middle section of the 24th ward.

Ruins at the middle levels.

Ayato finds an underground city in the 24th Ward. 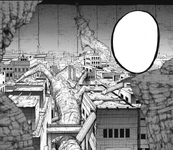 Nagaraja being mentioned in the 24th Ward.

Ayato talking with the residents of the 24th Ward.
Add a photo to this gallery

Retrieved from "https://tokyoghoul.fandom.com/wiki/24th_Ward?oldid=489838"
Community content is available under CC-BY-SA unless otherwise noted.