The 11th Ward Base (１１区アジト, jūikku ajito) was a complex in the 11th Ward of Tokyo, taken over by the organization Aogiri Tree. It was used for their operations there, and was the location of the 11th Ward Battle.

The sprawling base had a total of nine buildings, and was considered an extremely strategic location because of the surrounding terrain. Thick forests surrounded the complex from the sides, while a steep cliff and ocean made an attack from the front the only option.

Map of the base.

Exterior of the base. 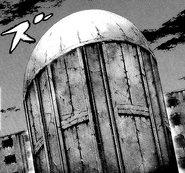 Exterior of Yamori's torture chamber.
Add a photo to this gallery

Retrieved from "https://tokyoghoul.fandom.com/wiki/11th_Ward_Base?oldid=425944"
Community content is available under CC-BY-SA unless otherwise noted.